Paintball taking off in Austin community 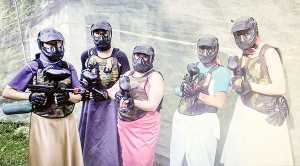 A bride and her bridesmaids recently spent part of a day at Splat! Paintball Field south of Austin on Highway 218. – Provided

A few months ago, a group of young women held a bachelorette party where they strapped on some armor, loaded markers and took to a paintball field just south of Austin.

At the end, they shot a wedding dress with paintballs.

“It was really cool,” said Terry Culton, owner of Splat! Paintball Field. “That’s one thing I’ve seen grow over the years is there are more and more women playing.”

To Culton, it’s another sign that in about 12 years at Splat, more and more people are getting on board with paintball.

Culton first started playing paintball about 20 years ago with his stepson. After a storm knocked over oak trees on his property, the two cut them down and made them into bunkers, which are still part of what would become Splat! Paintball Field.

When he first started, Culton admitted many parents and groups were hesitant about paintball, fearing their children would be hurt. But Culton said paintball is much safer than people think.

“They’re relaxed once they have come here and actually seen how it works,” he said. “Then all the fears are gone and they keep coming back.”

For the most part, Splat operates through rentals. Culton hosts events for many church groups, birthday parties, and bachelor and bachelorette parties. He also has open-field Sundays several times a year from 9 a.m. to 5 p.m., where people can get a rental package and extra balls.

Culton compared paintball to playing army or as simulated military play, but there’s much more to it than that.

Typically, a Splat paintball day starts out simple with some introductory games to get used to the course before introducing scenarios and games.

Typically when a group comes in, Culton said they start apprehensive, which is a sign the people haven’t played before.

“We help them get up and running pretty quick,” Culton said.

Once players are used to paintball and through course, Culton introduces games.

In a game called Skull, they throw a Halloween-type skull between the two teams and the teams have to bring it back to their fort to win. Players marked must drop the skull and return to their base to regenerate.

Another game, which has been played around the country for many years, is called Civil War, and players can only load one ball at a time and line up in a row and shoot.

There’s all types of paintball players: snipers, flankers, heavy gunners and more. Culton knows what he is.

Sometimes, Culton uses a heavy-duty marker and often a barrel that can shoot curves around corners.

“It’s like a baseball player throwing a curveball,” he said.

Regardless of the player types, Culton described paintball as a social activity, with players gathering and chatting in between rounds,

“It’s a real social event, too,” he said, as people chat between games at a pavilion on the grounds and talk about the games.

“This paintball field grew out of being a paintball player to begin with,” Culton said.

People get safety gear with rental packages, and Culton said they turn down the pressure on paintball markers — the proper term for paintball guns — to certain levels, and they also lower them for children.

Splat has several safety procedures in place. If children take their masks off during a game, they have to sit out matches and later turn in their gear if they don’t stop.

A basic package at Splat is $26, plus tax and a silver package is $40, plus tax, which features a faster, machine-gun like marker. People can also purchase extra paintballs.

Private groups typically book a day at a time and last three to four hours, according to Culton.

Culton shows no signs of quitting anytime soon, noting he once joked he’d need a walker with paintball markers mounted on it. Someday, he hopes someone else will keep the business going.

“It would be nice to see it continue beyond me,” he said.

Culton grew up in Austin and wants to see it move on.

Splat is open from April 1 through Nov. 30, depending on weather, but it’s closed for Thanksgiving and some other major holidays.