Park is the home to pools, pier, pickleball, pelicans, pigskin 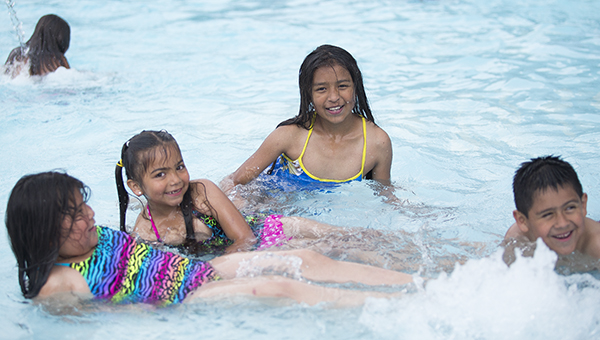 It’s the main city park for access to Albert Lea Lake, but more than that, it’s the park with the ever-popular Albert Lea Aquatic Center.

At 11.8 acres, Frank Hall Park places at No. 13 on the Tribune’s 25 favorite places of Albert Leans. Named for the first mayor of Albert Lea, it is one of the oldest parks in the city, among five listed in a 1911 city history book.

The city pool opened in 1975 and expanded in 1998. The main pool holds 466,200 gallons of water, with a diving well, concrete liner and filtration system. The zero-depth splash pool holds 47,000 gallons and has interactive play features. The curvy water slide is 236 feet of fun, and there are posts in place should the city decide to construct a drop slide.

A bathhouse with restrooms is near the splash pool, and the main building offers changing areas, showers, restrooms, lifeguard station, concession stand and the physical plant.

Nearby are a large paved parking lot, a six-hoop basketball court and pickleball courts.

Frank Hall Park surrounds the channel that feeds into Albert Lea Lake, making it a popular spot for fishing. In the winter, a village of fish houses forms on the lake ice. Sledders enjoy the park’s hill across the street from neighboring Academy Park.

The Minnesota Department of Natural Resources has a fishing pier there and built a boat ramp in 2002. This summer, through a grant from Anheuser-Busch, the Shell Rock River Watershed District built a boat launch for kayaks and canoes.

The cruise boat Pelican Breeze II docks at Frank Hall Park and offers rides on the largest lake in southern Minnesota throughout the summer. Pelicans are a common sight in the channel and out on the lake.

The city built public restrooms and picnic shelters and tables in 2000. The Kiwanis Clubs of Albert Lea donated funds to build a playground in 2006. The playground is near three horseshoe pits and several old oaks and cottonwood trees.

In 2013, the Albert Lea Grizzlies built a football field near the boat launch, with goal posts built by Lou-Rich, and Grizzly Field is where they play their home games each spring.

The beginning of the Blazing Star Trail is at Frank Hall Park. The trail has 1.9 miles on city land before heading eastward for six more miles.