Artwork to be 12 feet tall 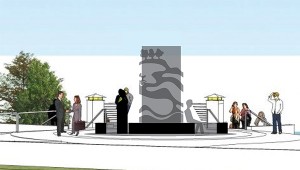 A city committee has selected a design submitted by three Winona State University students to be made into a permanent sculpture at the top of Fountain Lake Park.

Teams of students at the college submitted designs as part of a class, and the winning team’s design includes moving water and trees on a shoreline. The team members were Megan Allis, Andrew Betzolt and Jose Dominguez, said Albert Lea spokeswoman Teresa Kauffmann.

The students will be paid a $1,500 stipend for the design.

Kauffmann said the sculpture, 4 feet by 12 feet, will be cut out and will include seating around the base. It will be at the intersection of Fountain Street and Broadway and will not block views of Fountain Lake.

The structure will be made of steel in collaboration with Lou-Rich, who will donate labor, she said.

The city received 14 applications for the project, including four submissions from sculpture students at the college.

She estimated the total project cost to be between $15,000 and $20,000. The city has applied for an Arts and Culture Heritage Grant through the Southeastern Minnesota Arts Council, and Destination Albert Lea has pledged to give $5,700. Kauffmann said the grant deadline is Oct. 1, and they will find out in November if they are awarded. There would be a fundraiser for any remaining costs.

She estimated the sculpture would be made during the winter months and unveiled sometime in the spring or early summer of next year.

The city issued a formal request for the project at the end of August. The request asked that the sculpture reflect on the arts and cultural heritage of Albert Lea and incorporate a sense of movement in the design, as it will be on the Blue Zones Walkway.

The sculpture is the final piece to the renovation of the park and the reconstruction of Broadway. Fountain Lake Park is at the north end of downtown Albert Lea. Other renovations at the park were a staircase, ramp, rain gardens, fishing pier and fencing.