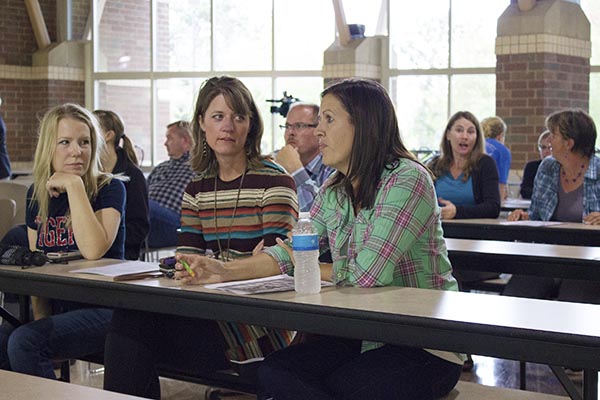 About 100 people attended the first public hearing on the proposed calendar, where they broke into groups and discussed positives and negatives. – Hannah Dillon/Albert Lea Tribune

About 100 people attended the first public hearing by the Albert Lea school board focusing on the issue of the proposed calendar.

The hearing was facilitated by Bruce Miles of St. Cloud-based Big River Group. Miles is a strategic consultant who works with school districts and businesses. 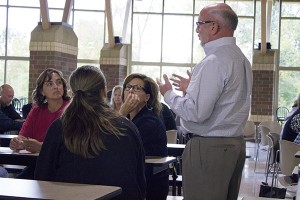 Bruce Miles of St. Cloud-based Big River Group LLC. faciliated the hearing. While groups were filling out their worksheets, Miles walked around and talked to the public. – Hannah Dillon/Albert Lea Tribune

People were given three worksheets to complete in groups of six to eight people. Miles split discussion among groups, then he collected the worksheets and read the responses aloud.

Miles said he would provide a transcript of the worksheets to each board member and Superintendent Mike Funk would put the transcript online on the district’s website.

Funk said the proposed calendar fit in to the Albert Lea Area Schools’ strategic plan. Funk said the board has been working on this document, which it calls Pathways to Success, for a year and has goals for children from preschool to graduation.

By the end of preschool, the district hopes to have 70 percent of students ready for kindergarten. Funk said that the percentage is less than half, right now.

The district also hopes to have 80 percent of students proficient in reading and math by the third grade. Funk said some grades are 20 percent below that benchmark.

Funk stressed that growth targets would be tailored to students instead of having the same targets for every student.

By the end of eighth grade, Funk said students would take a test to identify their strengths and weaknesses. Teachers could then work with parents to decide which pathway is best for their child: the career path, a traditional high school path or an advanced path.

Another milestone is the district hopes to have 90 percent graduation rate. For the past 10 years, Funk said the rate has been between 80 and 82 percent.

Funk said these are the challenges the board has identified and said the calendar is one part of addressing those challenges.

One participant asked about a survey conducted a year ago of parents and students and wondered where the results of that survey went. Miles stated he didn’t know and there was no response from board members.

Many participants spoke out to Miles, however, that they wanted the board to interact with them and wondered why board members were sitting in the front of the room and not with the groups.

The response on the worksheets seemed to be mostly negative, and many questions were asked via these worksheets.

The first worksheet asked three questions. The first is what Albert Lea Area Schools are known for.

The second question asked what Albert Lea will be recognized for in five years.

Responses included a higher graduation rate, higher ACT scores, restructuring of advanced-placement classes, higher percentage of students going to college and motivating the middle-of-the-road students. Some people also included that the district would lose young families to the calendar change.

Lastly, the first worksheet asked participants to identify priorities for the district.

Miles walked around while participants filled out the worksheets, and many people wondered why the board was not walking around doing the same.

The second worksheet asked about how the calendar will positively and negatively affect student achievement in Albert Lea.

Many of the responses were similar to previous responses. The positives included ending the first semester before winter break, reduce learning loss, offer time for a fall vacation and reduce burnout.

One group said the calendar will “appear” to bump achievement by adding more remediation right before state testing.

Some groups added statements that the calendar will benefit a small number of students and said parents should be allowed to vote on the matter.

The negatives included lowered enrollment, staff leaving, the commitment to the Freeborn County Fair, students sitting inside in August, the MCAs are scheduled right after the March break, that the summer is only two weeks shorter, issues with students getting to and going to remediation and loss of employment for teenagers.

Some groups said it would be more difficult to get elementary students in bed in August when it is light out later. Another group mentioned that the morale of gifted-and-talented students may go down if they feel all the extra school time is punishing them.

The final worksheet asked for more positives and negatives on the calendar issue, and many groups wrote similar things to the second worksheet.

However, many groups said that the proposed calendar won’t change how children are learning, will disrupt summer and that it is dividing the community unnecessarily.

Other groups brought up that teachers are afraid to speak up against the calendar for fear of being terminated or punished. Another group asked how the proposed calendar will work for families with divorced parents.

One group said that all of these changes are making them feel like their schools and kids aren’t good enough and that it is creating a wedge between the administration and parents.

At the end of the meeting, people were allowed to come up and talk to the board individually. Jennifer Hanson, the parent who started the Change.org petition against the calendar, presented over 350 signatures wishing to keep the traditional calendar to the board members.

Funk closed the meeting by saying that Miles told the board more dialogue was desired, and he said the next public hearing will have that.