Funeral services for Randall “Randy” L. Holland will be at 1:30 p.m. Wednesday, Sept. 17, 2014, at Trinity Lutheran Church in Albert Lea. The Rev. Curtis Zieske will officiate.  Visitation will be from 5 to 8 p.m. Tuesday at Bonnerup Funeral Chapel in Albert Lea and again one hour prior to the service at the church. Interment will be at St. Theodore Catholic Cemetery. 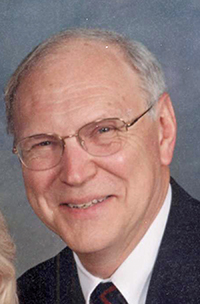 Randy was born Feb. 24, 1942, to Kenneth and Carrie (Skilbred) Holland in Forest City.  He was baptized and confirmed in the Christian faith. Randy graduated from Forest City High School. He began his college career at Waldorf College for two years and later transferred to the University of Northern Iowa in Cedar Falls, where he graduated with a bachelor’s degree. Randy was a resident of Glenville from 1969 to 1995, and then moved to Albert Lea where he currently lived. He was employed as a computer operations manager at Wilson & Co., and the plant’s later owners Farmstead and Seaboard, and worked in accounts receivable at ABG.

Those left to cherish Randy’s memory include his loving wife, Joan Holland, of Albert Lea; children Dale (Lisa) Holland of Farmington, Sara (Michael) McLane of Aplington, Iowa, and Christie (Ryan) Kroells of Rosemount; granddaughter, Mara Kroells; siblings Jerry (Winnie) Holland and Neoma Isebrand; as well as so many other loving relatives and friends.