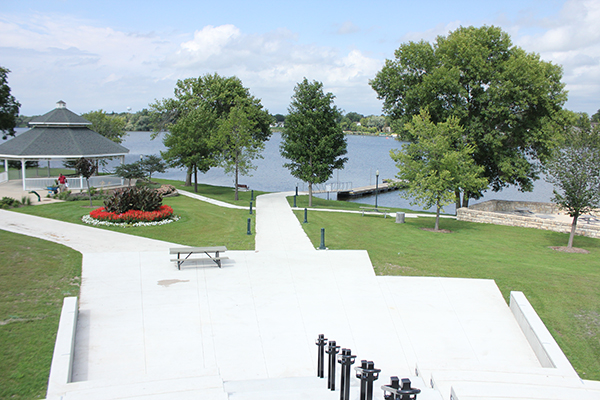 A $400,000 renovation finished in June drastically changed Fountain Lake Park. Among other things, it added a grand staircase that doubles as an amphitheater and provides greater access to the park. — Sarah Stultz/Albert Lea Tribune

The capstone to downtown Albert Lea, this location is popular for weddings, celebrations and provides easy access to the water of Fountain Lake.

Fountain Lake Park fills up every Fourth of July at dusk for an annual fireworks display. People sit on blankets and lawn chairs while the Albert Lea Community Band plays under the gazebo and kids frolic, playing with friends they just met.

About a dozen weddings take place at Fountain Lake Park each year, according to the Albert Lea Parks and Recreation Department.

The park went through a $400,000 renovation that was completed earlier this year. That included the installation of a grand staircase that doubles as an amphitheater. The city staff hopes it becomes a place used for outdoor performances.

There is no playground equipment, but a children’s garden exists on the west end. It was paid for with funds from the Albert Lea Sesquicentennial Celebration. The city turned 150 years old in 2006.

A rain garden is being established at the east end as part of the recent renovations.

A public dock was added last spring, making it a place where people swim in Fountain Lake — usually kids — and where boaters can tie-up and walk to downtown merchants or festivities.

Fountain Lake Park is positioned at the north end of Broadway and provides a visually appealing greenspace for the downtown. And being across from the North Broadway parking lot means the park gets used during farmers markets, carnivals, car shows or other events. Of course, it is nice just to smell the park’s flower beds, too.