ReVoiced to visit Albert Lea to talk to students, give a concert 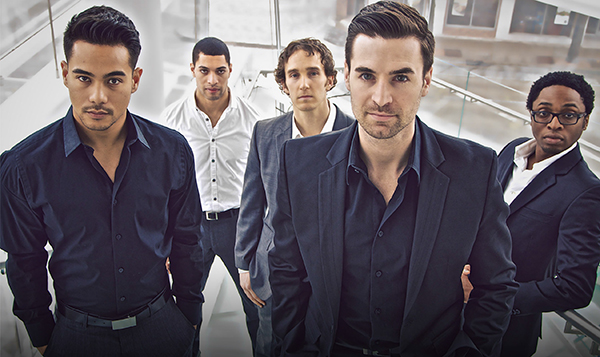 ReVoiced is an a cappella group that has played in schools, theaters and on cruise ships. – Provided

The buzz about a cappella

ReVoiced, a five-piece a cappella group who combine pop music with classic styles like doo-wop, are coming to Albert Lea this month.

The group is made up of Chris Rossi of Long Island, N.Y.; Dele Opeifa of Eugene, Ore.; Rolin Alexis of Tallahassee, Fla.; John Patrick of Omaha, Neb.; and Mark Hasman of Rochester, N.Y.

ReVoiced is visiting schools in Albert Lea and holding a concert as part of their Music in Schools tour, and the concert doubles as a fundraiser for Albert Lea High School choir’s trip to Hawaii in March of 2015.

Diane Heaney, vocal instructor at Albert Lea High School, said this is the first time reVoiced has been to Albert Lea. Besides doing school tours, the group has done many shows on cruise ships, and some of the members have participated in NBC’s “The Sing Off.”

Heaney said the group will try and go to as many schools in Albert Lea as possible during their day here. At the elementary schools and Southwest Middle School, reVoiced will do more of a demo and give their backgrounds as well as talk about the different jobs in the music industry besides being a pop star, Heaney said.

At the high school, the concert choir will perform for reVoiced and the members will give constructive critiques; some of the members are trained as teachers, Heaney said.

Despite the school year just starting, Heaney said she’ll pull something together for the choir to sing for the group.

Other a cappella groups have visited Albert Lea in the past, Heaney said. Some of the more notable groups are Tonic Sol-Fa, InPulse and Six Appeal. Heaney also said two a cappella groups from Luther College, one of men and one of women, visited last year.

A cappella groups have been popular with men for a while, but “Pitch Perfect” amped up the popularity with women, Heaney said.

After spending the day with students, reVoiced will perform a concert at the Albert Lea High School auditorium. This concert is a kickoff fundraiser for the choir’s trip to Hawaii next March.

Other fundraisers coming up for the choir include selling butterbraids, cheesecakes and Herberger’s coupon books.