Funeral services for Robert D. Olson, 81, of Glenville will be at 1:30 p.m. Wednesday at First Lutheran Church in Glenville. The Rev. Jim Rushton will officiate.  Burial will be at Greenwood Cemetery. Visitation will be from 5 to 7 p.m. Tuesday at Bayview/Freeborn Funeral Home and one hour prior to the services at the church.  Online condolences are welcome at www.bayviewfuneral.com. 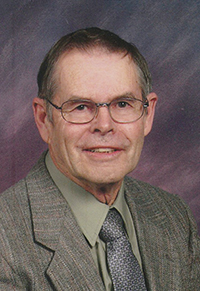 Robert D. Olson was born on Nov. 19, 1932, in Woden, Iowa, the son of Christ and Lillian (Heaney) Olson. He attended country grade school and graduated from Albert Lea High School in 1950.

On Aug. 14, 1954, Robert was united in marriage to Dorothy Kral at First Lutheran Church in Glenville. The couple lived and farmed east of Glenville. Robert worked for various ag-related businesses, retiring in 1995 from Budach Implement. He enjoyed gardening, watching high school sports, going to local theater productions and attending any other local events. He also enjoyed walking, bike riding and listening to the Minnesota Twins on the radio. Robert was an active member of First Lutheran Church where he served as president of the church council and he also taught Sunday school for many years. He was also a member of the Glenville Lions Club.

Robert was preceded in death by his parents; wife, Dorothy; mother and father-in-law, Charles and Olga Kral; brother, Curtis; and sister, Elizabeth.