Ronald Seath, 88, of Austin passed away Wednesday, Sept. 24, 2014, at St. Mark’s Lutheran Home. He was born Jan. 24, 1926, in Albert Lea to Leslie and Ella (Glockzin) Seath and attended Itasca country school. Following his 1944 graduation from Albert Lea High School, Ron received his bachelor’s degree from the University Of Minnesota school of agriculture in 1949. He served his country in the U.S. Army during the Korean Conflict in 1951 and 1952, achieving the rank of sergeant. 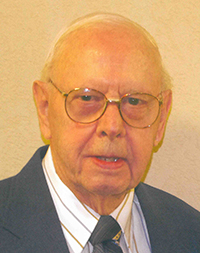 On Nov. 2, 1963, Ron married Margaret ‘Peg’ Goodwin in Minneapolis. The couple raised one daughter, Lori, who was married on Nov. 2 during the mega storm of 1991. Lori and her husband Craig have twin boys, Ethan and Eli.

Ron continued his education at Colorado State University, receiving his master’s degree in 1966. He made his living as a county extension agent, being hired by the Minnesota Extension Service as a 4-H agent for Mower County. This was a good choice for Ron, as he enjoyed working with the many 4-H members, parents and leaders for over 29 years. The Mower County Fair, the Minnesota State Fair and the 4-H livestock show were especially busy times.

Ron and Peg enjoyed many trips over the years. He was also interested in tracing his ancestry and sharing his charts with family and friends. He was an active member of First Congregational Church UCC, the Austin Noon Lions Club, NARFE and the Elks Club. He also volunteered with the Genealogical Society and delivered Meals on Wheels. In 2007, Ron and Peg moved to the Village Co-op in Austin.

He was preceded in death by his parents Leslie and Ella Seath and one brother, Roger Seath.

A memorial service will be held at 2 p.m. on Friday at First Congregational Church UCC in Austin with the Rev. Shari Mason officiating. Visitation will be held from 4 to 7 p.m. on Thursday at Worlein Funeral Home and one hour prior to the service at the church on Friday. Flag presentation will be by American Legion Post 91. Interment will be in North Freeborn Cemetery, Freeborn, at a later date.

In lieu of flowers, memorials are preferred to the First Congregational Church UCC or American Parkinson Disease Association. Services prearranged and performed by Worlein Funeral Home of Austin. Condolences may be expressed to the family online at www.worlein.com.