The rock wall brings the outside in 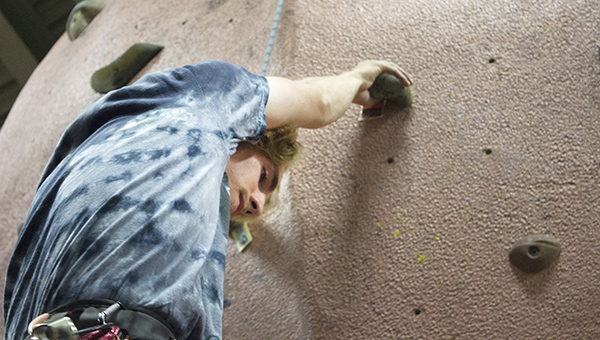 Bradford Milliron checks his footing as he scales a more difficult section of the rock wall. – Hannah Dillon/Albert Lea Tribune

Climbers were active in August

About 10 years ago, Scott Hanna decided to get involved with one of the newest things in Albert Lea — the indoor rock-climbing wall.

With the help of grant money, Albert Lea Community Education was able to create the climbing wall inside the gymnasium at Brookside Education Center. The wall caters to varying difficulties of climbers. Many people call it the rock gym.

Hanna, who said he’s been rock climbing himself for a while, said he wanted to get involved because he felt a rock gym pushed the comfort zone of Albert Lea, as he said the town is conservative toward new things.

The response has been slow and steady, Hanna said. He noted that many people doubt they can actually rock climb before they do it, but after they try climbing they realize it was all a matter of perception, he said.

There is a core group of climbers that utilize the rock wall, and there is also a Climbing Club that meets Tuesday nights. There is a form of open gym on Friday nights.

Hanna said some people travel from other cities to use the rock gym, but there’s also plenty of locals that use the facilities too.

This past August was the busiest August Hanna said he’d seen at the rock gym, explaining that since the summer months are so nice, people usually don’t want to be stuck indoors.

However, on rainy or cold nights, the gym might be full, Hanna said. It can get especially popular during the winter months when people don’t want to be outside.

However, Hanna said he’s always interested in getting more people on the climbing wall, but trying to get people to try something new can be difficult. He stressed that climbing is for all people, no matter their age, gender or activity level, and the biggest components are trust and perception.

Hanna compared it to kayaking, saying that people believe canoeing is easier than kayaking while it is usually the other way around.

Despite the slow and steady growth of the rock climbing wall clientele, Hanna said the response has been good.

However, there’s much more than just the rock gym, Hanna said.

“It’s just the tip of the iceberg,” he said.

The rock gym is part of experiential education, which also involves kayaking, canoeing, geocaching, snowshoeing and archery, among other activities offered by Albert Lea Community Education.

Experiential education was also on display at Albert Lea Floats, and Hanna said over 500 people got in the water in kayaks and canoes during the event.

Experiential education also offers punch passes; $25 buys five punches which can be used at the rock gym and boathouse as well as with snowshoeing, boating and geocaching.

Hanna said this is a cost-effective way to experience all experiential education has to offer, as each punch totals up to $5 — a 50 percent savings on each punch.

The rock gym is on the B side of the gymnasium at Brookside Education Center, 211 W. Richway Drive. 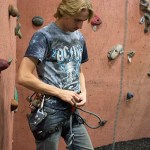 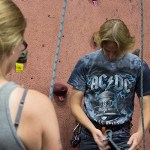 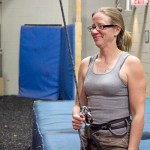 Julie Janssen acts as a belayer for Bradford Milliron as he prepares to climb the rock wall. A belayer can keep a climber from falling too far should a fall occur. – Hannah Dillon/Albert Lea Tribune 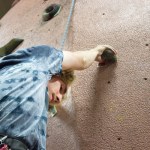 Bradford Milliron checks his footing as he scales a more difficult section of the rock wall. – Hannah Dillon/Albert Lea Tribune 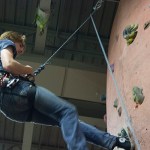 After reaching the top of the rock wall, Bradford Milliron scales the wall back to the ground. – Hannah Dillon/Albert Lea Tribune