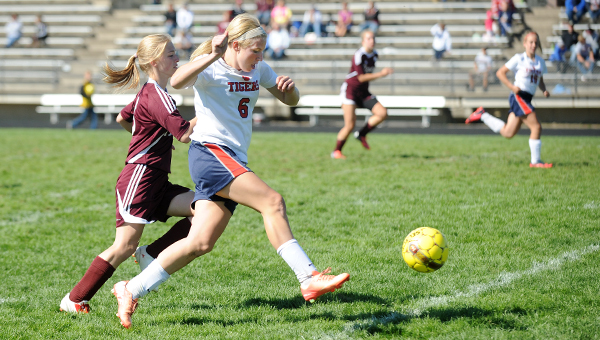 Taylor Thompson of Albert Lea dribbles toward the goal Saturday during a tournament at Albert Lea. — Micah Bader/Albert Lea Tribune

The Tigers shut out Fairmont 3-0 in the morning game and crushed Stewartville 9-0 in the afternoon. 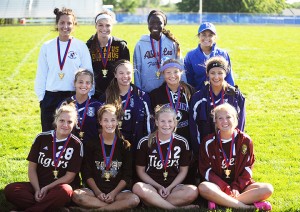 Albert Lea coach Rick Barnhill said the tournament provides an outlet for his team to grow.

“We always value the opportunity to win our tournament and win a trophy together as the first tangible achievement each year,” he said. “We savored the day, and it was genuinely a blast.”

Fairmont headed into the tournament with a 6-1-1 overall record with two wins and a tie over opponents from the Big Nine Conference before falling to the Tigers in a game that counted toward the Section 2A standings.

Albert Lea was led by Rachel Rehnelt, who scored a pair of goals in the first half. Katie Rasmussen tacked on another goal in the second half.

Kathryn Flaherty and Alexa Wood each had two saves.

Against Stewartville, Albert Lea jumped out to a 6-0 lead through the first 31 minutes and never looked back. Stewartville entered the tournament with a 1-4 overall record. 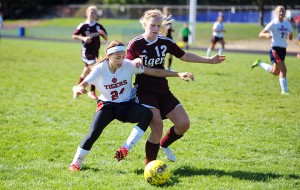 “We had contributions from all of our players in both matches and created a high volume of shots in each match as well,” Barnhill said. “Our reserves really embraced their opportunities and exhibited inspired play.”

Albert Lea was the only team that went undefeated, so the Tigers took first place.

The battle for second place was between Fairmont and Red Wing because Stewartville lost both of its games. Fairmont beat Red Wing 3-1. However, since both teams were 1-1, the tie-breaker was total goals scored. Red Wing had seven and Fairmont had six. Therefore, Red Wing took second, Fairmont was third and Stewartville was fourth.