University of Minnesota to smooth path for transfers 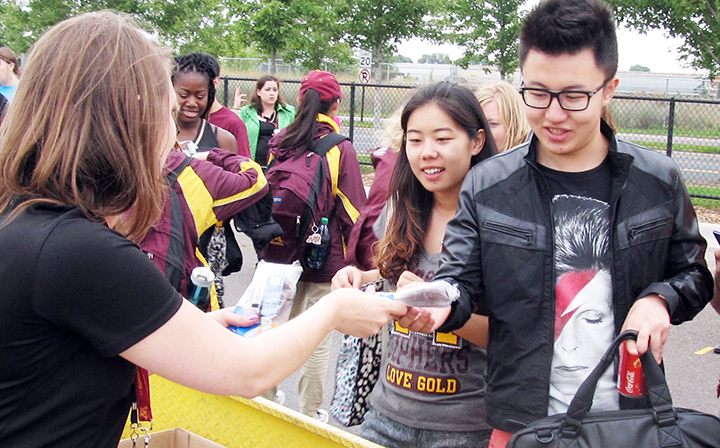 A University of Minnesota staffer hands out ice cream treats to transfer students at a tailgating event next to TCF Bank Stadium before the Gophers’ game against Eastern Illinois on Aug. 28. – Alex Friedrich/MPR News

4 in 10 start at another school

MINNEAPOLIS — Orientation at the University of Minnesota Twin Cities brings a week of structured activities designed to energize and support new students. But that’s only if you’re a freshman.

Roatana Dinh didn’t feel that love when he transferred to the university in 2012. For him, orientation amounted to a campus tour, an assembly at the student union and registration.

“I felt very lost, initially,” said Dinh, a senior psychology major from Apple Valley, who came to the university after a year at Normandale Community College in Bloomington. “Compared to other students, I don’t think I was primed well enough to have that identity.”

This year, Dinh is part of the effort to remake the transfer student experience at the Twin Cities campus, where nearly four of 10 undergraduates start at another school. Surveys show they’re not as satisfied with the university as those who attend the university their entire college career.

To boost that, university officials are doing more to extend the safety net to transfers, offering support networks and more space in residence halls.

“Transfer students tend not to be as engaged with our campus life,” said Robert McMaster, dean of undergraduate education. “That’s one of the things we’re trying to change.”

It’s a group that’s often very different from the traditional freshmen. Transfers are more likely to be minorities, foreign students and the first in their families to attend college. Many are older and work outside of school.

They also tend to succeed.

The most recent four-year graduation rate for transfers is almost 72 percent, about 13 percentage points higher than that of traditional students. Five- and six-year graduation rates were similar between the two groups, though McMaster cautioned that it’s impossible to directly compare those rates. Transfer students enter the university at different stages of their college careers, so U of M officials measure their graduation rates differently.

About 38 percent of last year’s new students at the Twin Cities campus were transfers, up slightly from the previous year. In a recent survey, only the University of Maryland had a higher percentage among Big Ten schools, with almost 48 percent. (Maryland only recently joined the Big Ten; Northwestern University was not included in the survey.)

Dinh said it’s tough to feel like a true Golden Gopher, and that he was indifferent toward campus events such as Spring Jam, a three-day student-run music festival on campus.

He’s helped remake the welcome for transfers to meet their specific needs. The university expanded transfer-student orientation from one day to three. There’s a new student transfer coordinator, a transfer-student board of representatives, and transfer student mentor network.

One of the clearest changes could be seen on Thursday, when student ambassadors greeted transfer students at a tailgating event in a parking lot next to TCF Bank Stadium — complete with free snacks, drinks and blaring music. There was more to follow for the newbies, including dinners, hang-out sessions and bowling at the student union.

The idea is to get transfer students “to mingle, and maybe make some friends so that first Friday after class, they don’t go home,” said Jordan Bugella, a 24-year-old pre-law senior from Bloomington who leads the student transfer board. He also transferred from Normandale in 2012.

The tailgating was already firing up one budding Gopher: Marin Hara of Tokyo, a 21-year-old urban-studies junior who transferred in from Pasadena City College in California.

“When I was in Japan, I was dreaming about American university life. Everyone wears the school shirt, the school sweater, with face paint and watching football games,” she said. “That’s still one of my dreams.”