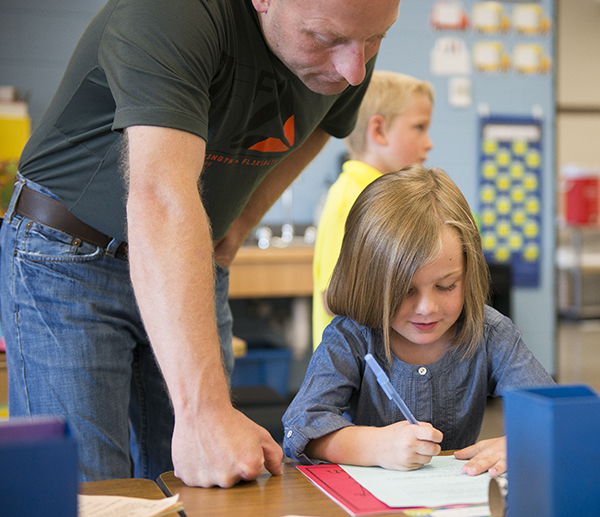 Ella Halvorsen, 5, writes out her name tag for kindergarten Tuesday at United South Central with help from her dad, Josh. The elementary students’ first day of school at the new building is today, but they were able to go in with their parents Tuesday to meet their teachers and find their classrooms. – Colleen Harrison/Albert Lea Tribune

WELLS — After over a year of construction, United South Central School District students finally had the chance to go to school in their new $24 million building Tuesday.

USC Superintendent Jerry Jensen said the first day went as well as expected. Drivers had to learn where to drive in the parking lots, where the drop-off spots were and how to get out of the parking lot.

The high school students, besides having classes, had some assemblies and building tours during their first day. 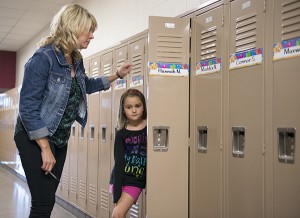 Though the school building is finished, the sports facilities at USC are not. Jensen said they are working hard to get the tennis courts finished as the tennis team is still playing at their old courts by the old school.

He also said the first volleyball game of the season was Tuesday.

“Every event is new,” he said, saying everyone is experiencing multiple firsts during this first day of school.

There was an open house Thursday so parents and students could see the building before school started. Though Jensen hadn’t heard much from the students, he said parents were impressed with the new building.

As well as having a new building, there is a handful of new staff at USC. There are about nine new teachers at USC this year, as some teachers retired or moved on after last year.

Jensen estimated the total amount of new staff is 12 — para-professionals as well as teachers. This is a little higher turnover than usual, Jensen said.

Tracy Magnuson, USC elementary principal who took up the position in August, had one word to say about the first day: “Fabulous.”

“We’re all new,” she said, saying that students, staff and parents are all going through this learning period together, and she said it was exciting.

Magnuson thanked the community for its support of the new school.

“It’s all about the kids and being committed to education,” she said.

Jon Melby, fifth- and sixth-grade teacher for USC, said he has taught for 38 years and said the new building is “unbelievable” and “awesome.”

“This is a dream,” Melby said.

Sarah Mantor, a fifth-grader who is new to USC this year, said she really liked the new library at the school. She said she was most excited to learn geography, as it is her favorite subject.

Chloe Lutteke, a third-grader, and her sister Lily, a second-grader, said they liked the new school a lot and that they had a chance to see it Thursday during the open house.

Chloe said she was mostly just excited for school to start, while Lily agreed with Sarah and said she really liked the library. Other favorite spaces of Lily included the auditorium and the playground.

About 650 students attend school at USC, though figures for pre-kindergarten through 12th grade won’t be verified until later week, Jensen said.

The new school is on the southern edge of Wells on the western side of Minnesota Highway 22. The address is 600 11th St. SW.

USC voters in August 2012 approved the issuance of $28.825 million in bonds to fund the new school, to purchase land and for related financing costs.

The students went from being in one of the oldest school buildings in the state one year to being in the newest the next.