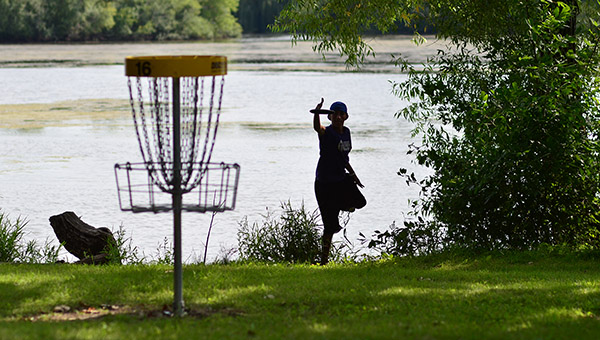 At 74.1 acres, Bancroft Bay Park, a former mink farm, is the largest park in Albert Lea.

The city agreed to purchase the land in 1972, and did so with assistance from federal and state funds two years later. It finally opened to the public in 1976. This park at the west end of Hammer Road comes in at No. 22 on the Tribune’s list of 25 favorite places of Albert Leans.

And though it has limited amenities, its users cherish the location for different reasons.

The most common park users are the disc golfers. This park has two 18-hole courses. Tall Grass Disc Golf Course was installed in 2008, and Oak Island Disc Golf Course was installed in 2012. The two courses bring visitors to the city, and locals hold leagues and welcome sanctioned tournaments. Disc golfers can be found hurling plastic saucers on these courses winter, spring, summer and fall.

Albert Lea doesn’t have a dog park, but that’s probably because Bancroft Bay Park acts as an unofficial off-leash area for dogs. In almost any season when the snow doesn’t get too deep, it’s common to see people walking or running with their pooches.

Nature lovers like to visit the park, too. Deer, rabbits, owls, swans, eagles, herons, ducks and other wildlife can be spotted at this serene location. There are wooded trails on the island for walking, primarily along the water, and there are trails on the mainland, some of which extend to the largely unmaintained expanse north of the Tall Grass course. This wild area continues north to where Bancroft Creek flows into Bancroft Bay.

The park is the setting the first weekend of each October for the pioneer reenactment called the Big Island Rendezvous, when 100 families make the park their home and more than 10,000 people visit. Cannons are fired, music is performed, food consumed, goods sold and old-time ways revisited. Hotels are filled, too. It started in 1987 on Albert Lea Lake’s Big Island and has been at Bancroft Bay Park since 1992.

In the winter, snowmobile riders enjoy crossing the island as they zoom around Bancroft Bay and areas north of the city.

It should be mentioned that the historical name for the island is Coney Island.