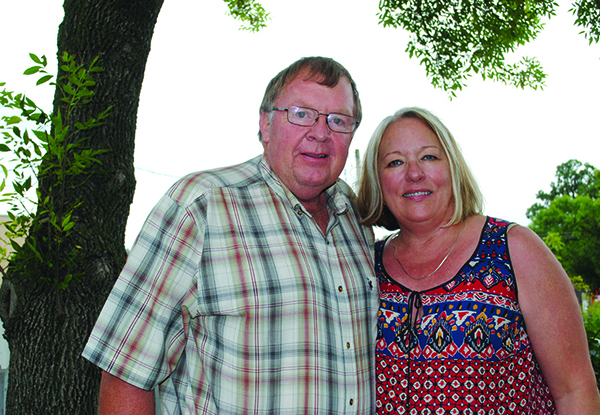 Bloms knew each other for years, married years later

On Aug. 16 the Bricelyn High School class of 1975 reunited but not in a typical reunion setting. They gathered for a special wedding.

Teresa and Morris Blom had known each other for many years. It all started at kindergarten roundup in Bricelyn, but neither one expected it would lead to where they are today — especially 39 years after they graduated and parted ways.

“I went to Gustavus and then began working in the federal prison system,” Teresa said. “I moved 10 times in 30 years.”

Her career took her around the U.S. from Seattle to Los Angeles to Washington, D.C. She eventually retired as a warden after working in Arizona for a number of years.

After that, she settled down, or so she thought in Denver as a program director at a college. That is, until she crossed paths with an old classmate again.

While Teresa was making her way around with her career, Morris found a living which kept him close to home. He was farming and continued to live in Bricelyn. But, about two years ago, their paths crossed.

“It was at Jodell Timm’s daughter’s wedding dance that we saw each other again,” Morris said.

Timm was a classmate at Bricelyn High School to both Teresa and Morris.

“Then a classmate of ours, Nancy, took a picture of us dancing together,” Morris added.

“She thought it would be a good idea if he and I got together,” Teresa added.

But Teresa wasn’t sure and since she was still living in Denver it wasn’t likely they would bump into each other all that often.

“That’s how our friends got involved,” she said.

Once their friend made the suggestion, a couple of other classmates and friends began giving Teresa and Morris not-so-gentle nudges and hints.

In fact, the couple was nudged together again in Las Vegas for a class reunion, where it seemed their friends had more ideas for getting the two together more often.

“Later that year, Teresa flew in to go to the state fair,” Morris said. “It was the first time someone from Denver asked to go to the Minnesota State Fair with me.”

After that, it seemed the push from friends came a bit more frequently. A few of the classmates had planned to meet up at a friend’s house to work on planning another class reunion.

“The real reason was to nudge us together,” Teresa said.

They had all planned to meet up at a friend’s boat house in Winona, so Teresa and Morris decided to drive there together.

It was on that drive, the couple said, when it ‘clicked.’ They talked the whole time as they drove from the Twin Cities along the Mississippi River toward Winona.

Their conversation strayed to a story Morris told about his mother remembering Teresa.

“Morris used to save phone cards and would give them to his mother. Then, one time she told Morris, ‘I know what you should do with these, you and Teresa were always such good friends you should use these to call her,’” Teresa said. “That was almost a sign to me.”

If that wasn’t sign enough for the two old friends, their conversation on the same car ride drifted to future visits with each other.

“Teresa jokingly asked where I wanted to go on vacation next and I said a cruise,” Morris said.” And Teresa said, ‘You’d do that?’”

So the couple agreed that in February they would do just that. After that car ride, they made it to Winona with friends and planned a reunion.

A few weeks after the drive, Teresa had some vacation time she needed to use so she called Morris.

“I invited him to Colorado and he accepted, he came at the end of September,” she said. “I had to get him there before fall harvest.”

That wasn’t his last trip to visit her either; in fact the visits became pretty regular. He flew out for Thanksgiving and even for New Year’s Eve.

Morris admits later he had booked all the trips he took through a travel agent, and when he booked the next trip he had his travel agent’s attention. He booked the cruise they had planned and they went on that in February.

“My travel agent asked if the cruise was for a special occasion and I told her I thought I might propose,” Morris said.

So he planned it out. Teresa and Morris were sitting on the deck having supper, but there were people sitting on either side of them.

“Teresa kept looking at me wondering if I was going to do it,” Morris said. “I just looked at her and said, ‘I’ve got a plan.’”

So, he brought her out to the balcony on the cruise and that’s where he proposed and where she said yes.

“I never would have thought we would end up together, Morris was like a brother to me almost,” Teresa said.

The couple even joked that they needed a gentle push but the nudge they did get would have pushed the hinges right off the doors. And that nudge was all from their classmates.

It started at kindergarten roundup, they stayed friends through high school and stayed in touch through adulthood.

“Whenever I would come back to Bricelyn I would call my best friends from high school and then we would call Morris,” Teresa said. “We have always been an unusually close class.”

They were all so close that their wedding also served as a class reunion and 16 out of 29 of their classmates had attended.

The couple had their ceremony at Bricelyn Lutheran Church where they had a tree planting ceremony. Morris brought dirt from his farm and Teresa brought dirt from the farm she grew up on and they mixed it together to plant a tree.

“Now that tree is planted in the front yard,” Teresa said.

Wanting to keep everything in Bricelyn, they held their wedding dance at the Bricelyn Fire Hall.

After the wedding, the couple went back to Las Vegas for their honeymoon which tied it back to one of the first times they were nudged together by their friends.

Now Teresa has come full swing and lives in Bricelyn once more. Except now she is with Morris.

“This wasn’t even in the cards,” Teresa said. “But, this will be the perfect next phase of life.”