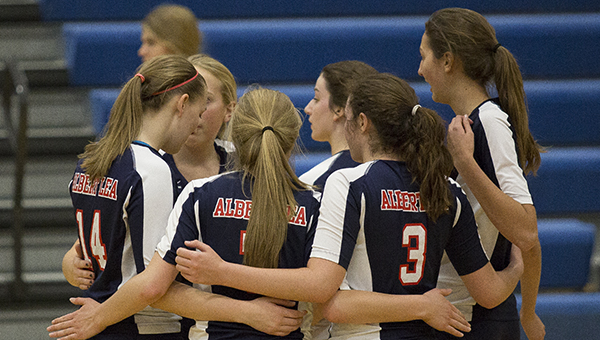 HASTINGS — The Tigers’ season came to an end Wednesday against Hastings in the first round of the Section 1AAA volleyball tournament.

“We’ve played Hastings before and knew we could compete,” said Albert Lea coach Lisa Deyak. “We wanted to challenge them.”

When the teams met at the St. Michael-Albertville Tournament on Oct. 11, the Raiders edged the Tigers 2-1.

Senior middle hitter Taylor Willis agreed with her coach, and said that she knew the match would be close and that the team came in with confidence.

“I think we’re a better team than our record shows,” Willis said. “We had more losses (this season) than we wanted, but we kept our heads up.”

She said most of their losses were by only a few points, and she felt the Tigers made their opponents work for their wins.

Willis had two kills and five blocks. Her fellow seniors, Hope Landsman and Kassi Hardies, had 13 kills and nine digs and four kills and two blocks.

Sophomore Camryn Keyeski led the team with 21 digs, while sophomore Julia Deyak had a team-high 28 assists.

Deyak said the team also had to adapt to a different schedule. As opposed to facing teams in Class A and AA in regular-season non-tournament play, Albert Lea played only AAA schools for the first time.

“That’s a very different rhythm,” Deyak said. “They struggled with that rhythm in their offensive game.”

While Deyak knows the team struggled with some aspects of the new schedule, she’s proud of them for making the change.

“They’re a gutsy team,” she said. “That takes a lot of courage, to play bigger schools. That’s a big sacrifice.”

She said that although the team didn’t have as many wins as it would’ve liked, this season was a good stepping stone for the young roster.

“We had a lot of people playing new positions that were new to varsity,” Deyak said. “There was a lot of new.”

Looking at the season as a whole, Willis said the biggest challenge was learning how to play together. Being one of only three seniors on the varsity roster, she said there were a lot of new faces this season who hadn’t played together as a team before.

Her advice to her teammates continuing on next season?

“Work on coming together,” she said. “That’s a big thing, being a team.” 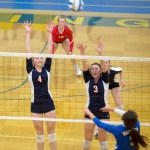 Albert Lea’s Taylor Willis, left, and Hope Landsman attempt to block a spike Wednesday during the first round of the Section 1AAA tournament at Hastings. — Colleen Harrison/Albert Lea Tribune 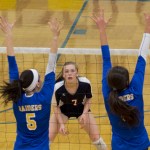 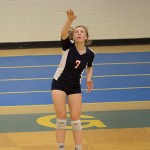 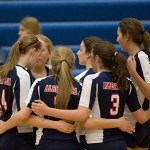