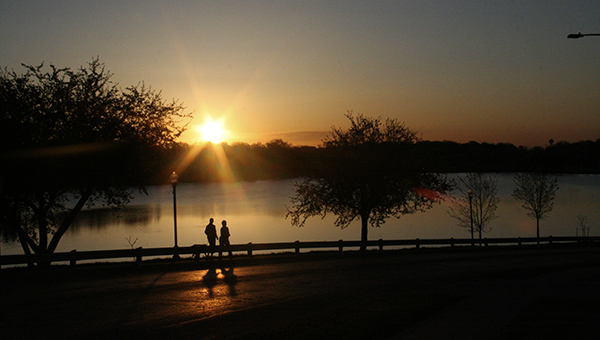 Two people and their dog jog down Fountain Street along Fountain Lake one morning in May 2009. – Tim Engstrom/Albert Lea Tribune

Was there ever any doubt? Fountain Lake places at the top of the list of 25 favorite places of Albert Leans.

It is the recreation hub for the city. Skiers can be spotted easily on summer days, and cruising boats can be found circling the shores on summer evenings. The Freeborn County Sheriff’s Office patrols the water. The Fourth of July fireworks are fired from City Beach and watched by large crowds at Fountain Lake Park and by boaters on the water as well as from various other shoreline locations.

The Bayside Skiers perform weekly throughout the summer, forming pyramids and jumping a ramp in Edgewater Bay. Canoeists and kayakers are a regular sight. Fishermen are found at the entrance to Dane Bay and past the channel of the lake dam. Ice fishing is popular in the winter near the Hatch Bridge, which is where Lakeview Boulevard crosses the narrows between the main body of water and Edgewater Bay. Cruising Lakeview Boulevard is a favorite pastime.

People can be spotted in all seasons walking, jogging, running and biking the Blue Zones Walkway, a 5-mile loop around Fountain Lake. It’s hands down the most popular exercise route. 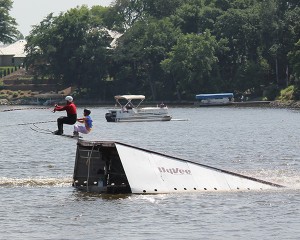 Members of the Bayside Water Ski Team ride over the jump during their Fourth of July performance in 2013. – Erin Murtaugh/Albert Lea Tribune

Fountain Lake has the third-oldest ice-out records in Minnesota, going back to 1912. The median date for the ice going out is April 9. The latest it has melted away is April 30, back in 1953. The earliest the ice has gone out is March 7, setting the record in 2000.

High rains causes Fountain Lake to flood some of its shores and nearby streets, and Katherine Island often is the gauge with which residents watch the lake levels.

There are two places for boats to access Fountain Lake: Along Minnesota Highway 13 across from Edgewater Park and at Brookside Park along Richway Drive.

Fish common in Fountain Lake are crappie, bluegill, catfish, carp and several types of panfish. Largemouth bass, northern pike and walleye have been caught, too. The Department of Natural Resources in recent years has stocked walleye and northern pike.

In 1854, George S. Ruble, considered the second settler of Albert Lea, wanted to build a dam to provide power for a spot he considered good for a mill. He returned to Beloit, Wis., and came back in August 1855 bringing his wife and son. They built a log cabin near the proposed dam and mill site. The ensuing project, a dam built in November 1855 across the Shell Rock River by today’s Bridge Avenue, resulted in the creation of a body of water.

That body of water, pretty much just a slough back then, Ruble named Fountain Lake. The water released from the dam today is called simply “the channel” and it flows to Albert Lea Lake. That channel officially is considered the origin of the Shell Rock River, which continues at the outlet of Albert Lea Lake.

Ruble’s home was where the present-day Nelson’s Shell station is. Ruble and other early settlers platted the city in 1856 and were instrumental in its early growth. The city gained the county courthouse in 1866 and incorporated in 1878.

Over the years, the city grew to surround the lake. At the same time, much of the land directly on the lake was kept in the city’s possession, allowing access to the water for all and in many locations. Most homeowners who “live on the lake” actually reside across the street from the shoreline, though there are stretches of private shoreline on the Park Avenue peninsula, east of the City Beach and along parts of Edgewater Bay and Dane Bay. Many businesses along Bridge Avenue, Fountain Street or nearby value their views of the lake. In fact, the Third of July Parade starts at the county fairgrounds then comes along the lake shoreline to reach Central Park.

In May 2014, Gov. Mark Dayton signed a $1.1 construction bill that included $7.5 million in funding of a $15 million project to dredge Fountain Lake. The other $7.5 million is slated to come from a local-option half-cent sales tax overwhelmingly approved by Albert Lea voters in 2005. The 2014 campaign for the state funding and the 2005 campaign for the local tax were examples of just how much Albert Leans cherish Fountain Lake.

The Shell Rock River Watershed District is working on the next steps in the dredging project. The district has made gains in the past decade in cleaning up waters feeding Fountain Lake.

Officials hope the coming removal of sediment will last longer than past ones. From 1940 through 1942, and again from 1962 up until the mid-1970s, two dredges trolled the waters of Fountain and Albert Lea lakes, removing silt, dirt, sand and rocks from the lakebeds.

A recap of the Tribune’s 25 favorite places
of Albert Leans:

The Tribune staff compiled what it feels are the 25 favorite places of Albert Leans. Agree or disagree, it will be enjoyable to mull over and discuss. Send feedback to letters@albertleatribune.com.

Note: The Tribune purposely left places of worship out of consideration for the list. Even though church congregations and church buildings are separate, it nevertheless would have been difficult to part the two and, further, to discern a community’s liking for one church building over another. Also, cherished places of the past, such as the Elks Lodge and the Casino Dance Pavilion, were not listed. However, that idea might make for an interesting list in itself.