Funeral services for Ann Marie Serrano will be at 2 p.m. Saturday at Salem Lutheran Church in Albert Lea. Visitation will be from 5 to 8 p.m. Friday at Bonnerup Funeral Service in Albert Lea and again one hour prior to the service at church. The Rev. Richard Spande will officiate. 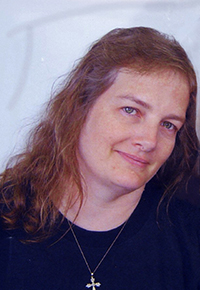 Ann Marie Serrano, 50, died unexpectedly Monday, Oct. 13, 2014. Ann was born in Albert Lea on March 12, 1964, to Robert and Mary (Heather) Hacker. She was a lifelong resident of the Albert Lea and Emmons area. Ann attended Albert Lea Public Schools, graduating in 1982. She went on to cosmetology training at Michael’s College of Cosmetology in Albert Lea in 1985. Ann has been employed at Larson’s Manufacturing and, most recently, Diamond Jo’s Casino as a supervisor.

Ann has been a member at Salem Lutheran Church where she was baptized, confirmed and raised her daughters. She was active in the American Bikers for Awareness, Training & Education organization in the Flatlander’s Chapter.

In 2011 Ann married Art Serrano in Albert Lea. Together they enjoyed going out to eat, attending movies and concerts, and celebrating special days together. Ann also loved her “babies” Spartacus and Furface (cats). Ann and her husband enjoyed spending time playing the Mafia Wars game on Facebook daily. Many friends have expressed their sadness and prayers for Ann through social media.

She is preceded in death by her mother, Mary, and her grandparents.