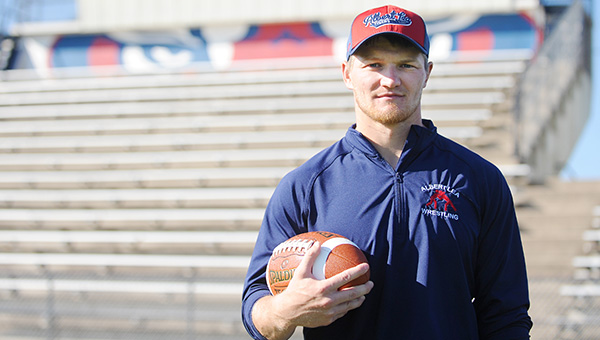 Before he found success at the high school and collegiate levels on the mat and the gridiron, Josh Bain had the fire to compete.

He built on that foundation with help from his twin brother, Justin.

“It was that twin competition,” Bain said. “We were always fighting over something, whether it was to get the last bite to eat or the remote for the TV.”

Bain’s mother, Christina, found a way to put that energy to better use through sports. 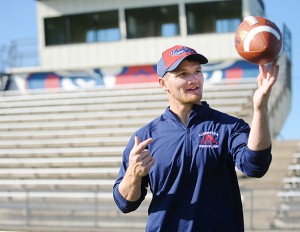 “Our mom saw that there was football, so we did that, and then wrestling,” he said. “She just wanted us to be active. It just grew from there.”

Bain wrestled in kindergarten, and he played tackle football for the first time in fourth grade. High school and college wrestling and football careers followed at Grand Meadow High School and Hamline University.

Each year of high school, Bain qualified for the Class A state wrestling tournament in a different weight class as part of Grand Meadow/Le Roy-Ostrander/Kingsland’s program. He started at 112 pounds, and by the time he was a senior he was the state runner-up at 152 pounds.

“You grow, and hopefully you get a little more muscle. You work hard, and you get what you deserve,” he said. “I had a lot of work into it.”

That’s what Bain instructs his players and pupils as well. Along with filling a role as an assistant varsity wrestling and football coach, he teaches health, physical education and developmental adapted physical education, while traveling between Southwest Middle School and the Area Learning Center. Bain took over Albert Lea wrestling head coach Larry Goodnature’s teaching duties when he retired last year, he said.

On the football field, Bain is the Tigers’ defensive coordinator. He played outside linebacker in high school and college, while his brother played inside linebacker. His biggest influence was his favorite player on his favorite team: Brian Urlacher of the Chicago Bears.

“He’s physical, he’s intelligent and he’s got a nose for the football,” Bain said. “He’s just relentless on defense. That’s what I like to see my defense do as well.”

After playing nine-man football at Grand Meadow, Bain became familiar with 11-man at Hamline, which broadened his expertise to multiple systems.

“Josh is an exceptionally knowledgeable coach,” said Albert Lea head coach Kevin Armbrust. “He brings a lot of fun and intensity to our program.”

“It was evident that he knew football and was very dedicated to our athletes,” Armbrust said. “Hiring him was a no-brainer.”

The career goal is to be a head coach, but Bain said he wants to stay patient.

“It would be nice in the future, but right now I’ve got a lot to learn,” he said. “I just need to keep taking tips from guys like Armbrust and Goodnature — always learning.”

Interesting fact: Bain’s twin, Justin, is a Vikings fan, but because they’re so competitive, Bain is a Bears fan.