AUSTIN — Austin will have a new city administrator on Dec. 8, though not everyone on the Austin City Council agrees with the decision.

The council voted 4-3, with Mayor Tom Stiehm casting a tiebreaker vote, twice on Monday to approve a $124,000 per year contract with former Worthington administrator Craig Clark. 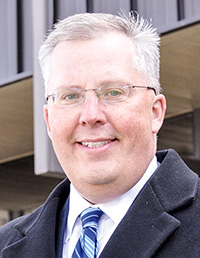 The at-will contract also stipulates Clark will receive a raise to $128,000 per year after six months and a positive job evaluation from the council.

The contract calls for Clark to get 20 days of vacation each year and up to 40 days of sick time. It also includes a $400 a month car allowance, and up to $3,500 for relocation expenses in addition to movers, which the city will pay for. Those relocation expenses are for Clark’s transition to Austin, which could include temporarily renting a home.

“We’re not paying for new refrigerators and stoves,” City Attorney David Hoverstein said. “This is a legitimate expense that he has to submit receipts and expenses for.”

Though some members were pleased with the deal — council member Roger Boughton praised Clark as “the right man for the job” and thought the contract was fair for both sides — Carolan, Jordal and Austin took exception to what they saw as generous contract terms for Clark.

At issue is the large amount of vacation days Clark will receive. Clark will be given credit for 12 years of service when it comes to determining his vacation eligibility, which means he will earn 20 days of vacation per year. Hoverstein told the council Clark had originally asked for 25 days of vacation, which is what he earns in Worthington.

Carolan said, after the meeting, he felt there were a few details he thought weren’t fair toward the city. Austin told the council before the preliminary vote that he was concerned with Clark’s negotiations and didn’t think the contract benefitted the city as much as it did its new administrator.

“How long does he stay here if he’s just out for the buck?” Austin told the council.

“I’m at a loss for words as to why they would vote against it,” he said.

Clark’s hiring marks the end of the city’s search for a new administrator, which began in May.