Ask the Expert by Stacy Palmer

Albert Lea was the location for the pilot project of Blue Zones concepts in 2009. What were the results? What has happened since?

In 2004, Dan Buettner began an expedition to discover pockets in the world where people live extraordinary long lives and in some cases live 10 years longer than their American counterparts with only a fraction of the chronic disease. Armed with research, he identified five regions where people reached age 100 at a greater rate than in the United States: Okinawa, Japan; Loma Linda, Calif.; Sardinia, Italy; the Nicoya Peninsula, Costa Rica; and Ikaria, Greece. These areas became known as Blue Zones, and nine common practices that lend to longevity were shared amongst these communities. These evidence-based practices are known as the Power 9 principles, which guide lifestyles across the five Blue Zones areas. Those nine principles fall into four categories: 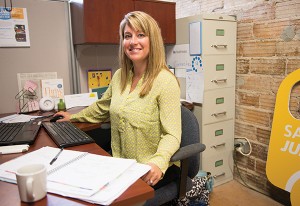 • Having the right outlook.

Many of these may be familiar to residents of Albert Lea who took part in walking moais, cooking demonstrations, purpose workshops or other Blue Zones-inspired activities.

In 2009, Albert Lea rallied under this model and proved that simple lifestyle adjustments can improve well-being. We saw a lot of changes that remain in our community even today including many walking moais, healthy snack carts and healthy fundraisers in schools and lasting community projects like the Blue Zones-inspired trail around the lake and the city’s new, pedestrian-friendly downtown streetscape.

This community played a critical role in demonstrating that these concepts can be translated into tangible well-being improvement, and the work from the pilot here was also instrumental in developing a program and tools that have been implemented across the country including in California’s Beach Cities, 15 Iowa communities, Fort Worth, Texas, and Hawaii.

Now we have an opportunity to renew that well-being and continue our efforts as we work toward being named a Blue Zones Community. You can help by taking the first step toward increasing your personal well-being.

We invite you to join us for a kickoff and homecoming rally on Nov. 5 where Dan Buettner will return to share the Blue Zones story, our successes to date and what is next for our community.

Other sectors that will be involved include schools, worksites, restaurants, grocery stores, churches and local leaders. In each of these areas, permanent environmental changes will support making the healthy choice the easy choice. The goal is to create sustainable change that promotes healthy behavior in our community, please join us!

For more information on the Blue Zones Project and to take the personal pledge visit bluezonesproject.com or stop by our office located in the National Vitality Center in Prairie Wind Coffee on Broadway in Albert Lea.

In addition to being a nurse, Stacy Palmer is the engagement lead for the Blue Zones Project in Albert Lea.