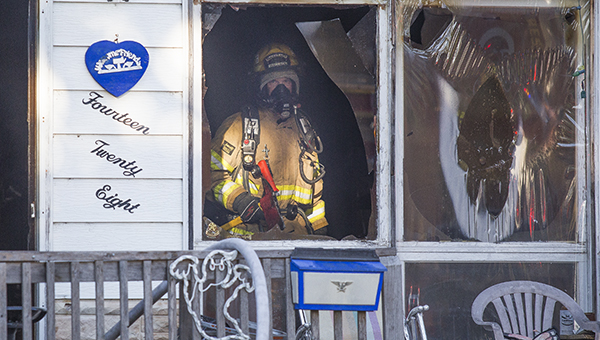 An Albert Lea firefighter looks out through a broken window of a house at 1428 Academy that caught fire this morning. Colleen Harrison/Albert Lea Tribune

A house in southern Albert Lea was damaged by fire Wednesday morning in what appeared to have started from an overcrowded electrical circuit.

One cat perished, and a woman at the house when the fire began was transported to Mayo Clinic Health System in Albert Lea as a precaution, according to Albert Lea Fire Department Capt. Mark Light. Her condition is unknown.

The fire, at 1428 Academy Ave., was reported at 8:28 a.m. Light said it began in the living room in the front of the house, and firefighters could see heavy smoke coming out of the front window on the main level when they arrived.

The smoke traveled throughout the entire house and could also be seen coming out of portions of the top level.

Neighbors stated the woman had been inside sleeping.