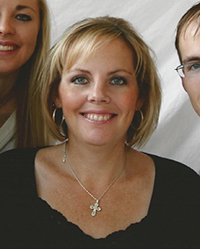 She graduated from Capri Cosmetology and owned her own salon for 26 years. She took classes and became an EMT-I for the ambulance crews in Blairstown and Belle Plaine, Iowa. In 2010, she became a nurse’s assistant in the ER at the University of Iowa. Prior to her death, she was going back to school to become a medical coder.

Debra was a devoted mother and grandmother. She enjoyed baking and cooking for her family and friends. She enjoyed gardening and filled them with an abundance of picturesque flowers. She loved spending quality time with her grandchildren and doing whatever she could to put a smile on their precious little faces. But above all, she enjoyed giving love to all those in her life. She was a spiritual person and thanked her maker for all that she was blessed with everyday. She will be deeply missed by her family, friends and all who knew her.

Debra is survived by her parents Jack and Diane VanHorn; her three children, Jerra, Jennifer and her partner, William Lewis, and Trevor and his wife, Stacia; two grandchildren, Aulani Johann and Lily Lewis; her life partner, Jon Maynard, and his four children, Sam, Matt, Sarah and Meghan; and two siblings, Rebecca Grubb and Robert (Lucy) VanHorn.

She is preceded in death by her grandparents Harley and Lucile VanHorn and Nels and Rosamond Gordon.