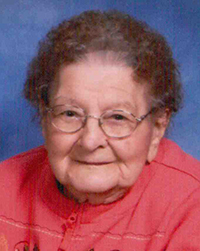 She was born July 15, 1912, in Berlin, Germany, the daughter of Paul and Bertha Schmidt. She and her family moved to the United States when Elsie was three months old. They settled in the St. Paul area for a time and later moved to Iowa. She attended country school in Farnhamville, Iowa, through the eighth grade. Elsie was the oldest of 10 children.

On Sept. 6, 1938, she was united in marriage to Verner Hanson in Gowrie, Iowa. They moved to the Lyle area in 1954, where they farmed until 1971. Elsie worked on the farm alongside her husband. They later moved into Lyle where they owned and operated the Lyle DX gas station until 1977. Elsie worked alongside Verner pumping gas, working on engines and changing and patching tires. After Verner’s death in August of 1977, Elsie continued to operate the gas station for a short time on her own. She enjoyed traveling, visiting all 50 states and Canada. She was secretary of the Woodbury Cemetery Association, an active and willing member of the Lyle Senior Citizens and Our Saviors Lutheran Church, member of the Lyle Memory Gardens and other various activities in the Lyle community. Elsie was an avid gardener. She loved her flowers and enjoyed her vegetable garden. She also had a love for playing Scrabble, playing cards, doing crossword puzzles and especially Mexican Train Dominoes with her friends at the Heritage House in Lyle.

Elsie moved out of her home in Lyle and lived her last six years at the Heritage House in Lyle. The family would like to thank her grandson, Steve Orth, and her great-granddaughter, Courtney Nelson, for the loving care they gave their grandma over the years, and her dear friends at the Heritage House and close friends in Lyle who lovingly checked in on her and drove her many places. You all made it possible for her to stay in her apartment where she was so happy.

Funeral services will be at 11 a.m. Friday at Our Saviors Lutheran Church in Lyle with the Rev. Barbara Finley-Shea officiating. Interment will follow the service at Woodbury Cemetery in rural Lyle. Visitation will be from 4 to 7 p.m. Thursday at Worlein Funeral Home in Austin and for one hour prior to the service at the church on Friday.  Memorials may be directed to Our Saviors Lutheran Church in Lyle or to the Lyle Memory Gardens. Services prearranged and performed by Worlein Funeral Home of Austin. Condolences may be expressed to the family online at www.worlein.com.