Funeral services for Ethmer E. Wright, of Albert Lea will be at 1:30 p.m. Friday at Trinity Lutheran Church in Albert Lea. The Rev. Curtis Zieske will officiate. Interment will be in Graceland Cemetery. Military honors will be accorded by Albert Lea veterans organizations. Visitation will be from 4 to 7 p.m. Thursday at Bonnerup Funeral Service and one hour before the service at the church. 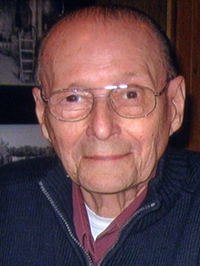 He was born at home, 427 Commercial, to Arthur and Audrey (Osteen) Wright on Aug. 6, 1926. Dr. Will Gamble delivered Ethmer; times were tough and his dad gave Dr. Gamble a 22 Colt Woodsman pistol instead of cash for the doctor’s fee.

He married LaVonne Hatleli and two daughters were born to this union, Constance and Tamera. Their marriage ended in divorce.

He married Marlene Larson on Feb. 27, 1954, at the Little Brown Church. He was so happy and proud to celebrate 60 years of marriage this year.

He worked at Enderes Tool Co. for 61 years in shipping and as plant manager, and finally working part-time in production control. Ethmer was a member of Trinity Lutheran Church, VFW and the American Legion where he proudly served as post commander in 1995 and 1996. He made beautiful custom hunting knives, enjoyed making them and was very proud of how they turned out. He made small wooden items for his family, lap desks, blanket stands, Christmas trees, flags and other items. He had an extensive collection of American Indian artifacts, which he discovered locally. He passed his passion for artifact discovery onto his family.

Ethmer and Marlene enjoyed snowmobiling and camping and, in general, they loved the outdoors.

After retirement he had coffee with friends and loved having breakfast at the American Legion. He was most proud of his children, grandchildren and great-grandchildren. Ethmer was a great boss, had a very kind and forgiving heart and illustrated the true art of understanding. Ethmer was a very loving husband, father and grandfather. His family will miss him greatly, but rejoice in all the good memories they have.

Memorials may be given to Trinity Lutheran Church, American Legion Post No. 56 or any charity of your choosing.