Facilities used for much more than Freeborn County Fair 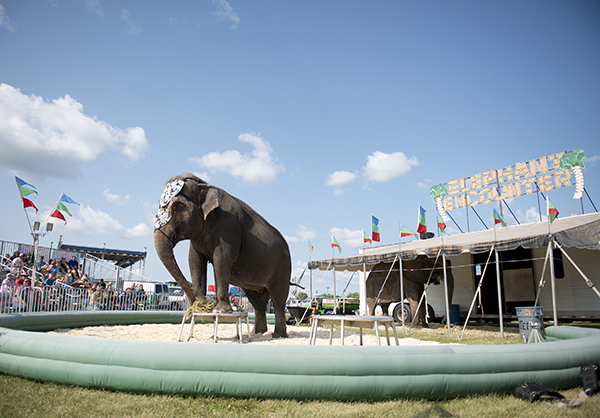 Cora introduces herself to the crowd while Shannon shades herself under an awning before the start of the Elephant Encounter program at the Freeborn County Fair. — Colleen Harrison/Albert Lea Tribune

At 1031 Bridge Ave. encompassing 45 acres, the fairgrounds come in as No. 5 on the Tribune’s countdown of 25 favorite places of Albert Leans.

The Freeborn County Fair has an attendance number of about 95,000 people. When a single event attracts that many folks, it shows just how cherished and revered it is.

The Freeborn County Fair is best known for its Grandstand attractions of musical artists over the years, being featured mostly for its country music entertainers. Over the years such popular names as George Jones, the Oak Ridge Boys, Mickey Gilley, Charlie Pride, Alabama and Roy Clark have been Grandstand headliners, among others.

The fair offers carnival rides, livestock and horse shows, 4-H projects, exhibition booths, exotic animals such as tigers and elephants and that distinct fair food. The beer garden is a common hangout in the evenings, and kids can be seen climbing all over the machinery on Machinery Hill.

Besides the fair, the fairgrounds is home to the annual Freeborn County Relay for Life, Big Island Bar-B-Que, Minnesota Spring Barrow Show, 4-H Club events, horse shows, livestock shows, rummage sales and other events. It is the starting point of the annual Third of July Parade. It serves as a parking spot for the Big Island Rendezvous. And the fairgrounds occasionally becomes the home of various types of RV campers. There are 44 campsites with water and sewer and three dump stations.

The Fairlane Building hosts many events through the year, such as weddings, banquets and fundraiser breakfasts.

In 2011, the fairgrounds hosted the Red Power Roundup, a celebration of International Harvester products. In 2013, many fans of Harley-Davidson motorcycles gathered at the fairgrounds.

The fairgrounds are a source of childhood memories for multiple generations of Albert Leans and are still a place for people of all ages to make memories today.

The Tribune staff compiled what it feels are the 25 favorite places of Albert Leans. The results will be published over the course of the coming week. What will be No. 1? Agree or disagree, it will be enjoyable to mull over and discuss. Send feedback to letters@albertleatribune.com.