For some university students, plagiarism is a foreign word

It was half an hour before deadline, and Zizo Amro’s paper still wasn’t finished. 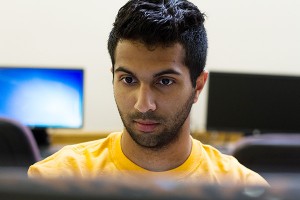 Zizo Amro, 21, a senior majoring in finance and minoring in communication at the University of St. Thomas, works on his homework for business ethics class on Sep. 29 at O’Shaughnessy-Frey Library in St. Paul. Amro got into trouble with plagiarism in his freshman year. He is from Saudi Arabia. — Yi-Chin Lee/MPR News

Three years ago when he was a freshman, the University of St. Thomas student had about three and a half of the required five pages for his analysis of a short story. Worried the paper looked thin, he went online, found a student paper on the same story and copied a paragraph verbatim into his own work.

It’s a story that frequently plays out in dorm rooms, with one exception. Amro, a recent transplant from Saudi Arabia, had no idea he had done something wrong.

“I swear I really didn’t know,” he said. “It’s a really small paragraph. I thought it wouldn’t make a difference.”

But by the standards of U.S. colleges, it was wrong, and potentially disastrous.

International students are pouring into Minnesota colleges and universities at rates higher than ever before. Some are unfamiliar with American academic standards and start school without a clear definition of plagiarism — or its consequences.

The proportions are similar statewide. Indian, Saudi and Chinese students combined made up almost 43 percent of the roughly 13,200 international students enrolled at Minnesota colleges and universities in the fall of 2012, according to the Institute of International Education.

Students from Eastern cultures are generally used to working in groups toward a common goal in ways that can run counter to the American tradition of independent scholarship, Friedman said.

Amro, now a senior studying finance, said he didn’t know at the time that taking a single paragraph of someone else’s work was wrong. He hadn’t come away with a clear understanding of plagiarism after he saw a presentation on it at his orientation.

Officials at several Twin Cities colleges say the number of international students inadvertently violating academic codes is small — at most, a few per semester per school. But the frequency is rising alongside statewide international enrollment, which jumped almost 15 percent from fall 2009 to fall 2012.

Punishments for cheating can be severe. Most colleges give students a failing grade on any assignment they’re caught cheating on. Further offenses can result in failing a class, suspension or being kicked out of the university.

Expectations, reporting can vary by professor

When Amro turned in that English paper his freshman year, his professor asked to meet with him.

“I was like, ‘Oh, my paper has to be good,’ you know?” he said. “She stopped at this paragraph and there was a huge circle. And she said, ‘This is not yours.’”

Luckily for Amro, the professor gave him a chance to fix his mistake without reporting him for plagiarism.

But Amro’s experience illustrates the murky area international students can find themselves in when they unknowingly violate cheating policies. It’s usually a professor’s call whether to report a student for plagiarism. And schools don’t have specific guidelines for giving international students slack for not understanding the rules.

Precise expectations for when to cite sources can also vary by professor, said Alisa Eland, associate director for counseling and advising at the University of Minnesota’s International Student and Scholar Services.

That can further confuse international students who are new to English and the American education system.

“You can get charged with plagiarism for doing the exact same thing that in another class was acceptable,” Eland said.

Not every international student cheats out of ignorance, said Chirayu Dongre, an academic counselor for University of St. Thomas undergraduates. Like any other students, they may turn to copying out of desperation, because they feel overwhelmed and don’t know where to look for help.

“They want to do well,” Dongre said. “They oftentimes don’t want to disappoint the professor.”

Some cultures even consider citing sources to be disrespectful, said Aaron Colhapp, who directs international student programs at Macalester College.

“You’re insulting your professor because he or she doesn’t know that the source is Aristotle or Confucius or whatever,” he said.

Several colleges make a point of bringing up plagiarism in their orientation events for international students.

Colhapp, for example, walks Macalester students through the consequences of cheating and encourages them to take a one-credit writing class specifically designed for students from other countries.

In addition to its orientation for international students, St. Thomas is holding monthly events this year focusing on topics like plagiarism and stressing the importance of classroom participation and building relationships with professors.

Amro said there are a number of resources at St. Thomas, like the university’s writing center, that can help struggling international students.

But when he worked at his school’s orientation week this fall, he noticed the plagiarism talk came after a long day of ice-breakers and events.

“At some point, students … they don’t pay attention anymore,” he said.

Amro said he was a strong student back home in Saudi Arabia. But he had to work extra hard just to pass his classes when he first arrived at St. Thomas.

Typical college behavior like putting assignments off until the last minute is a lot harder for someone without strong English skills, he said. That’s why he thinks some international students might be tempted to plagiarize.

Tram Vu, a freshman from Vietnam who is attending the University of Minnesota, went through a similar rough period when she came to the United States halfway through high school.

In addition to struggling through English, Vu said she had to get used to essay exams, researching topics and citing sources. Vietnamese teachers and students focused more on memorizing answers than expressing creativity, she said.

But there were some upsides. “That two years helped me to understand what is the expectation,” Vu said.

Vu now serves as the international engagement coordinator for the Minnesota International Student Association at the University of Minnesota. She said her school — which has more international students by far than any other college or university in the state — has plenty of resources and student groups that can help scholars from overseas.

Ultimately, international students face most of the same pressures and problems that domestic students do, said Eland, from the U’s International Student and Scholar Services.

Plagiarism isn’t unique to international students, she said, and they aren’t the only ones who may struggle to know where the line is: “I do think it’s an issue every university student has to really understand.”