Former college fieldhouse has been an ice arena for 38 years 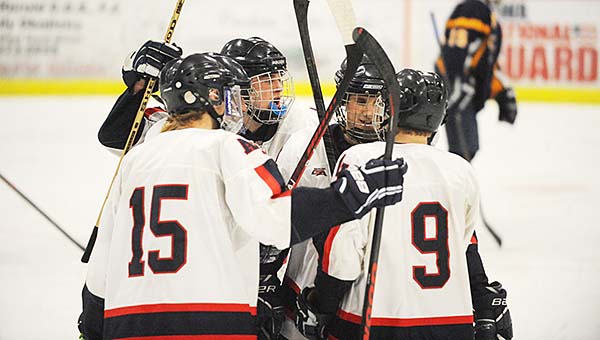 The Albert Lea boys’ hockey team celebrates after scoring a goal in the first period in February against Waseca during the first round of the Section 1A tournament. Albert Lea won 4-1. – Micah Bader/Albert Lea Tribune

It is the home of hockey in Albert Lea. At an unlikely location on the western edge of the city, the Albert Lea City Arena is where the Albert Lea Tigers and the Waldorf Warriors take to the ice and the site of youth programs for hockey and figure skating.

City Arena comes in at No. 9 on the Tribune’s list of 25 favorite places of Albert Leans.

Built in 1966, the big building at 701 Lake Chapeau Drive wasn’t always an ice arena. Its original name was Lea College Fieldhouse, and it was home to the sports programs. Lea College existed in Albert Lea from 1965 to 1973, and most of its campus facilities were in the Lake Chapeau neighborhood, though some were downtown.

The city purchased the building in 1974 after the college folded and made renovations in 1976 that allowed for an ice rink. Beforehand, Albert Lea figure skated and played hockey inside a livestock arena at the Freeborn County Fairgrounds.

A second ice rink was installed in 1999 after local fundraising. It is where players warm up before going out on the main ice, and it is used for games during hockey tournaments.

In 2008, the city installed a blanked dehumidifier that runs from the end of the City Arena west along the apex of the curved ceiling. In August 2009, new compressors to chill the ice and a cooling tower to remove heat from the compressor were installed. That included adding infrared heaters over the bleachers, something fans appreciate.

The Albert Lea Thunder, a Junior A hockey team like the Austin Bruins, played at the City Arena in 2008 and 2009 before the league shut the team down for having a pay-to-play system. The Thunder, however, left renovations behind: offices, a speaker system, a plush locker room, a players’ lounge and a nicer upstairs lounge.

In 2010, after storms damaged the asphalt shingles, the City Arena received metal shingles that should last about 50 years.

There are six locker rooms at the City Arena, making it handy for all kinds of tournaments for all ages. It has a four-sided scoreboard hanging over the ice. In the summer, the Colstrup Rink is kept going, but the Nystrom Rink is melted and used for the Off the Wall Soccer youth program as well as banquets, parties and small and large gatherings.

There are public skate times during the week, but the most popular time is at 6:30 p.m. Sundays.

The offices for the Albert Lea Department of Parks and Recreation are at the City Arena, too, located on the east side, just to the left as people enter the main entrance.