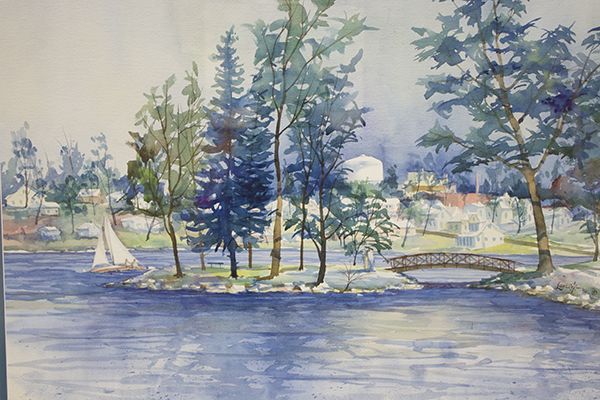 A former Albert Lea artist will return as his watercolor paintings go on exhibition at the Albert Lea Art Center. 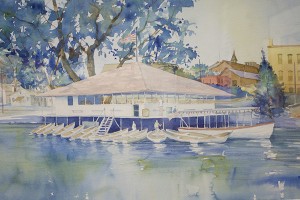 The boathouse at the north end of Broadway Avenue was a popular place for dances, and Steve Larson depicted it in one of his paintings of Albert Lea. – Hannah Dillon/Albert Lea Tribune

Steve Larson moved to Albert Lea in the mid-1970s from north Mankato. He worked at ALMCO for about 10 years and Corchran Inc., in Waseca. It was during his time at Corchran Inc. that Larson started painting in watercolor.

“It became an obsession,” Larson said.

He said it was a good counterbalance — he would work in the day, then come home and paint in the evenings. 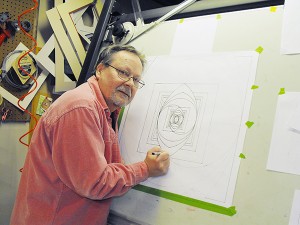 Steve Larson stands in front of his drafting table, working on one of his geometric paintings. – Provided

Larson was commissioned by Riverland Community College to create some works for an expansion they were doing.

Marty Shepard, artistic director at the Albert Lea Art Center, said a percentage of building costs within the community college system is spent on art for the new space.

The paintings are vibrant with a theme of blue tones, and Mullen described them as warm and comfortable paintings.

The show will kick off Sunday with a grand opening, and Larson will be in attendance. 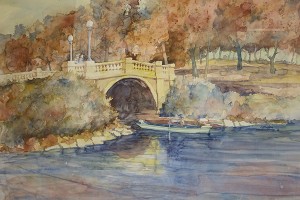 Although many of Steve Larson’s paintings in his Albert Lea series have a blue theme to them, this painting of Hatch Bridge features rusty orange leaves. – Provided

Larson said he loved working on these paintings and that he worked hard and had fun. However, shortly after painting his Albert Lea watercolors, Larson moved in 2003 near Starbuck on Lake Minnewaska to a property that he’d been gifted.

Now Larson is a member of the Prairie Renaissance Cultural Alliance in Morris. He also worked in the Morris schools, teaching after school art and giving watercolor lessons during The Zone, an alternative to study hall.

Shepard said after Larson left Albert Lea he went professional, and Larson said he does consider himself to be a professional. He worked on small prints and framed, matted and shipped them to customers.

Around Sept. 11, 2001, Larson said he quit doing the small prints because of the downfall of the economy, and now he just paints for himself in his basement studio with a view of Lake Minnewaska.

In addition to watercolor, Larson also does some pottery, cartooning, collage and some purely geometric work with acrylics on plywood.