Hoppy beer has a citrus balance

There are beer drinkers who wander into the market of craft beers and enjoy the lighter end of things. And then there are the hopheads.

The hopheads are people who appreciate the bitterness of hopped beer. A misnomer about hopheads is the hoppier the better. Actually, they like varying degrees of hoppiness, depending on the weather, the occasion, the other ingredients in the beer and their own spur-of-the-moment desire. Hopheads know India Pale Ale beers generally are their source of bitterness, but, to be sure, there are all kinds of IPAs out there. 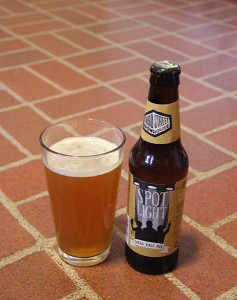 The Third Street Brewhouse out of Cold Spring right here in Minnesota has produced an IPA with a keen balance of malt and hops.

It pours with a beautiful, hazy, deep golden color and has an aroma of hops and spruce. This beer reminds me of the North Woods with each and every sip, with its pine-like maltiness, perhaps somewhat sweet thanks to caramel. Yet, it is not overpowering. It is not over-the-top hops. It seems like it has a tangy hint of grapefruit in the finish.

It is a seasonal beer, coming out in March and April, but the fact that it is still in stores in October makes me think it has sold so well that it might become one of Third Street’s regulars.

Like many IPAs, the hops also mean a high-alcohol beer, but most hopheads aren’t out to get drunk so much as pursue a taste they enjoy. Spotlight is 7.3 percent alcohol by volume and posts a 70 for IBUs — international bittering units. By comparison, Miller Lite is in the 8-12 range, while Budweiser and Corona are in the 10-15 range, and Stella Artois is 15-20.

Spotlight is not another hop-bomb West Coast-style IPA, where the IBUs reach 95. It has a low carbonation and is light enough to enjoy with dinner but strong enough for hop lovers to get their fix. It hints at the citrus, evened out by the toasted malt and isn’t a juice box. That’s where the word “balance” is deserved.

Call it a crisp, moderate bitter beer. It seems to be perfect for a lakeside evening, where the drinker has to go from boat to barbecue and from sand to cigar. At the same time, left behind in the refrigerator, it would warm the bones on a cold fireside evening in the cabin during a winter visit. Maybe it ought to be called a Midwest-style IPA.