Hunting. It’s not just for the guys anymore … 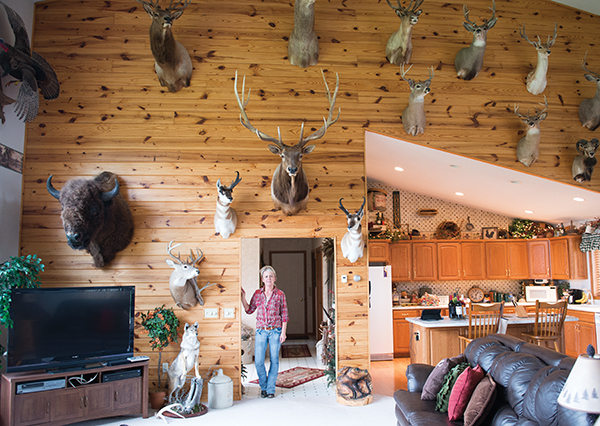 Angie Stickfort stands in the living room of her Albert Lea home, decorated in multiple trophies from hunting trips she and her husband, Craig, have gone on.

Albert Einstein said, “Look deep into nature and then you will understand everything better.”

Angie Stickfort, owner of Cheers Liquor in Albert Lea, has been hunting since she was a child. She said her favorite part of trekking out into the woods and laying in wait is that she’s outside and closer to nature. 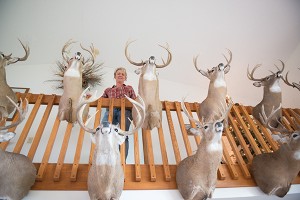 Angie Stickfort has gone deer hunting with her husband, Craig, but her favorite game to hunt is turkey.

“I just love nature,” she said. “I love being out there… the whole world wakes up when you’re sitting out there.”

Spend time in a wild place, in the silence, and you’ll understand why that quote from Einstein is her favorite.

Stickfort’s father first took her hunting when she was 7. She said her dad mainly hunted geese and ducks. It was Stickfort’s husband of 27 years, Craig, who got her into turkey hunting.

“I grew up an outdoor girl, and I always have been,” she said.

The Stickforts do a lot of hunting on their acreage in rural Albert Lea and in Mound City, Kan. Stickfort said there are various turkey seasons in both spring and fall and said she typically has better luck during the spring seasons. She uses a 12-gauge shotgun to hunt turkey and a muzzleloader for the rare occasions she hunts deer. She gets up before sunrise to venture out into the woods with her husband, who calls like a hen — a female turkey — while a decoy hen sits out in the open. The call is supposed to attract toms — male turkeys — and lure them out of the trees where they’re roosting. 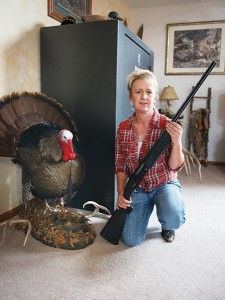 Stickfort poses next to one of her trophies. She hunts turkeys with a 12-gauge shotgun.

“Turkeys are not dumb birds,” she said.

The fowl have excellent eyesight, according to Stickfort, and can spot movement as minuscule as blinking, even when a hunter is decked out in camouflage gear from head to toe.

Stickfort said they use as much of the animal as possible when they bag anything on their hunting trips. They’ve made venison burgers and jerky out of the deer her husband has gotten, and they’ve made turkey kabobs and even a Thanksgiving dinner from the turkeys they’ve brought home.

Walking into the Stickfort home, the main room is lined with various trophies all over the walls. Deer, elk, turkeys, a bison and even a bearskin rug, to name a few. The couple has taken trips out West and has even brought bears back from a hunting trip in Alaska and have gone fishing down in Mexico. All of their trophies are professionally done by Tom’s Taxidermy in Clarks Grove. 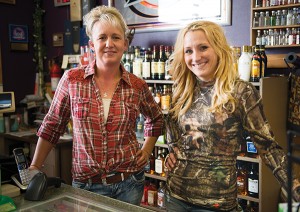 Cheers Liquor owner Angie Stickfort and manager Jenny Heinrich hunt together. Heinrich picked up the hobby from working with Stickfort for the last seven years.

Stickfort said the items on a turkey that make for bigger and better trophies are the length of its beard and the size of the spurs on its feet.

Stickfort believes that, while hunting is a male-dominated field, it is becoming more popular with women.

“Women want to do this stuff, too,” she said. “We hunt like men, only prettier.”

Stickfort stressed the importance of safety and experience, no matter the gender of the hunter. When her husband got her into turkey hunting, she said he made sure she had plenty of target practice before she ever went out in the field. She’s also taken a hunter safety class, which she said is offered locally twice a year. She remembered being in a class with mostly 12-year-old boys. Nevertheless, the class teaches safety and mechanics for being out in the field.

The Stickforts’ avid hunting has rubbed off on Jenny Heinrich, manager at Cheers Liquor, 1617 W. Main St. With this being her first year hunting, she said Craig had her taking lots of target practice as well. Heinrich, who’s worked for Stickfort for seven years, said she loves to try new things and finding different ways to be athletic.

Both Stickfort and Heinrich had plenty of advice for newcomers and encouraged them to give hunting a try if it’s something they’re interested in.

“It’s not for everybody,” said Stickfort. “Go with someone you know and are comfortable with.”

“Craig says it’s called hunting, not shooting,” said Heinrich.”You’re not guaranteed to get anything.”

“I just love being outside,” said Stickfort. “Each trip out becomes another memory.”