Memorial services for Izola Hareid, 94, of Albert Lea will be at 1:30 p.m. Wednesday at Bayview/Freeborn Funeral Home. Deacon Mike Ellis will officiate. Interment will be at St. Theodore’s Cemetery. Visitation will begin at noon Wednesday until the time of the service. Online condolences are welcome at www.bayviewfuneral.com. 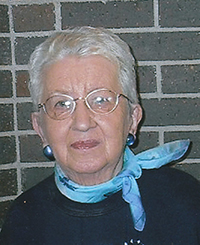 Izola Loree Hareid was born March 7, 1920, in Webster City, Iowa, the daughter of C.E. and Elnora (Foster) Quinn. She grew up and attended school in Freeborn. Izola managed and waitressed for many years at various restaurants before owning Lakeside Cafe.

In February of 1961, Izola was united in marriage to Clifford J. Hareid Jr. in Albert Lea. She was a faithful member of St. Theodore’s Catholic Church. Izola loved to cook and bake, play cards, bingo and bowling. Most of all, Izola enjoyed time spent with her family.