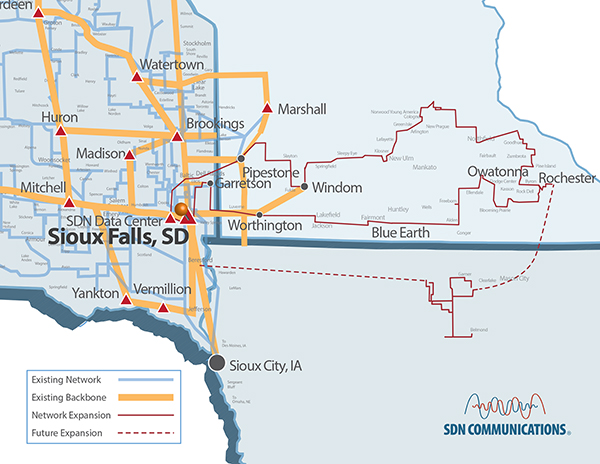 The map shows the formation of a regional telecommunications network. – Provided

7 connectivity companies to connect their services

Owatonna-based Jaguar Communications has partnered with five telephone companies in southern Minnesota, one in Iowa and Sioux Falls, S.D.-based SDN Communications to form a regional network.

Over the summer, Jaguar moved its Albert Lea location from Marshall Street to the corner of Newton Avenue and Clark Street.

“The bigger the network, the more value to the end user,” said Bevcomm CEO Bill Eckles.

Businesses and institutions that need secure connections without using the general Internet are examples of what the communications companies service, Eckles said. That can be banks, hospitals and even wireless providers linking cellphone towers.

The new territory will stretch from Goodhue to the Twin Cities suburbs to Mankato and Rochester and into Iowa. SDN serves all of South Dakota and has partnerships into neighboring states.

“The companies are all independent telephone companies, like our owner-members,” said SDN Communication CEO Mark Shlanta. “They have seen how our South Dakota members and business customers have benefited, and they want to follow that successful model in their service areas.”

The agreement will require some fiber construction to interconnect all the companies with SDN. Construction is slated to start immediately. Once complete, that connectivity will be sold by SDN and will benefit businesses with multiple office locations.

“Banks are a good example,” Jensen said. “They have a home office and branch locations in many communities and need to share electronic data among all locations. When they can do that on one provider’s network, such as SDN, it not only becomes more affordable but easier to manage.”

Large carriers, such as AT&T and Verizon, similarly look for providers who can carry data traffic long distances on one, interconnected network, according to a Jaguar Communications press release.