Janice Lucille Warner was born Jan. 14, 1921, in Albert Lea to Daisy and Robert Earl Warner. Jan grew up in Albert Lea with her parents and one sister, Marjorie. She was baptized and confirmed at First Presbyterian Church in Albert Lea, graduated from Albert Lea High School and then attended Monmouth College, where she met her husband, James. 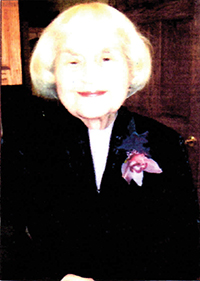 Janice transferred from Monmouth to Iowa State Teachers College to pursue a degree in early childhood education, marrying James H. Munn on Dec. 27, 1941. After college, the two of them moved to Great Lakes, Ill., where James served in the United States Navy. Following World War II the couple moved back to James’ hometown in Westhope, N.D. James was in business there with his father and brother at People’s State Bank, and it was there in Westhope that Janice and James raised their four children.

In the early 1970s following James’ retirement, the couple moved to Mesa, Ariz., where Janice sang in the church choir, served as a deacon, volunteered in the church office, was an active member of PEO and a part of a writer’s club, The Scribblers, which she thoroughly enjoyed. After James’ death in 1992, Janice continued to live in Mesa until she moved to Manning, Iowa, in 2008. She had lived the past 2 1/2 years at Manning Plaza until her recent illness. She died Tuesday, Sept. 9, 2014, at Manning Regional Healthcare Center following a bout with acute pancreatitis.

Janice was a wonderful flautist in her earlier years and continued her love for music throughout her life. She was also a gifted writer and left her family a treasured collection of her writings. Janice will always be remembered by her genuine interest in others, her gift of drawing others out in conversation, her gracious demeanor and her profound humility. Her family will always be grateful for her wonderful example as a role model.

Janice was preceded in death by her parents; her sister, Marjorie; her husband, James; her daughter-in-law, Sallie; and niece, Peggy.

A memorial service was Sept. 11 in Manning. Interment will occur at Westhope Cemetery at a date yet to be determined.