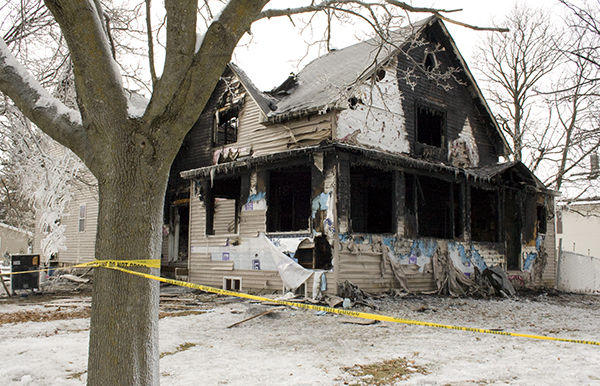 Most of the house at 403 Fifth Ave. W. in Ellendale sat blackened on the afternoon on the day after an arson fire in December 2011. – Sarah Stultz/Albert Lea Tribune

The verdict came on what was the seventh day of the trial in Steele County District Court. Misgen showed no response as the court clerk read the decision. 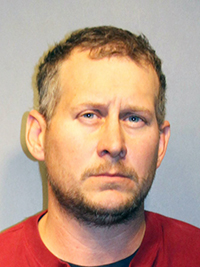 Prosecutors accused Misgen, 43, of starting a fire in the early morning hours of Dec. 7, 2011, that destroyed his Ellendale home at 403 W. Fifth Ave. It was the second of two fires that firefighters responded to that morning. Prosecutors said he intended to collect on insurance payments from the blaze.

Steele County Attorney Dan McIntosh said he was surprised the verdict came back so quickly but noted it was the verdict that the evidence supported.

McIntosh in his closing arguments went through all of the evidence from the trial and  tried to put together pieces of the puzzle surrounding the case.

He described Misgen and his wife, Sara, as having almost $430,000 in financial liabilities at the time of the blaze, including delinquent sales taxes, property taxes, child support payments, restitution and utility payments, to name a few. He showed evidence that Sara kited at least $30,000 in checks from one account to another to pay bills in the six months leading up to the fire.

“The financial picture shows they were sinking fast,” McIntosh said.

The lawyer said evidence shows Misgen started not only the second fire that ultimately destroyed the house but the first fire in the kitchen, as well.

He said if the first fire started from Ramen noodles left on the stove —  as the defense suggested — Misgen would have noticed there was fire when he went back to the house twice in the evening to grab belongings.

He also talked about paper found smoldering on the countertop.

Ellendale firefighters came to the scene, ventilated the house and removed the stove from the house as a precaution. They reportedly left at about 2:45 a.m., and then the second fire was reported a little more than an hour later.

Fire investigators testified the second fire was caused by someone intentionally, likely with an accelerant, and that it was not related to the earlier fire physically.

Swanson argued that there was no evidence of an accelerant used at the house though investigators testified that the damage and speed of the fire pointed to one being used.

McIntosh referenced earlier testimony that if paper or alcohol were used as accelerants they would likely not have been traced after the fire.

Misgen’s wife, Sara, had also reportedly purchased isopropyl alcohol that night at the Walmart in Owatonna.

McIntosh referenced cellphone records, which showed the cellphone towers Misgen and his wife were calling from the evening of Dec. 6, 2011, through the morning of the fire. He used these records to point out inconsistencies in the couple’s statements.

Sara testified that the family arrived home before the first fire and that Mark went inside first to unlock doors and turn on lights in the house. She said he came back outside in a panic after finding the house filled with smoke and called 911.

Cellphone records showed his 911 call originated on a tower in Blooming Prairie about 11 miles away from the house and ended on the Ellendale tower about 2 1/2 miles away.

McIntosh said this suggested Misgen was moving during the call, likely driving.

The prosecutor also talked about neighbors who witnessed fire coming from the house and who saw a gold-colored car similar to Misgen’s near the house before the second fire. One reportedly saw a man approach the house with something in his hand.

Swanson argued the state had not proved beyond a reasonable doubt that Misgen committed the crimes.

“The state was close, but there was one piece missing,” Swanson said in his closing statement.

The Misgens submitted an insurance claim for $395,000 after the fire, of which about $382,000 of that was to be for the structure itself. McIntosh said the claim was not an accurate depiction of the house’s value because half of the house — which was under construction — was not completed. It had been sitting unfinished for several years.

After hearing the verdict, Steele County District Court Judge Joseph Bueltel ordered Misgen be allowed to be released on his own recognizance until his sentencing — slated for Jan. 5 — because he has always been cooperative in making his court appearances and did not appear to be a flight risk.

McIntosh had requested Misgen be held in custody until the hearing because the charges carry a presumptive prison commitment.

Misgen’s wife, Sara, pleaded guilty last week to a charge of issuing a dishonored check in exchange for dismissing her charges of aiding and abetting arson and insurance fraud.