Memorial services for Lyle Burton Buss of Albert Lea will be held 2 p.m. Saturday at Good Samaritan chapel in Albert Lea. The Rev. Kent Otterman will officiate. Friends may greet the family one hour prior to the service. Interment will be in Round Prairie Cemetery. 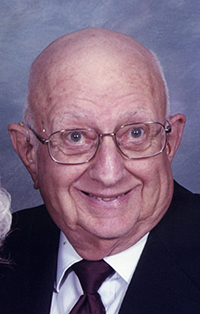 Lyle was born July 10, 1920, to Frank and Gertrude (Jewett) Buss in Grand Forks, N.D. They moved several times around the area before settling in Albert Lea. Lyle attended school in Albert Lea, graduating in 1938. He attended welding school before joining the Navy during World War ll.

Lyle married Erliss Anderson on Oct. 9, 1942, in Bremerton, Wash. He served on the USS Sigsbee which was kamikazied on April 14, 1944. After the war ended, he went to college at Western Washington State University, graduating with a music degree. He taught music and was a high school counselor for over 30 years in Bellingham, Wash.

Lyle is survived by his wife, Erliss; son, Loren, and wife, Evelyn; and granddaughters Lyla Christine (Shon) Davis and Lorelyn Rae Buss. Also surviving are two great-granddaughters, Kyla Ruth and Lyza Jane Davis, as well as many nieces and nephews.

He was preceded in death by his parents and one sister, Vaida.