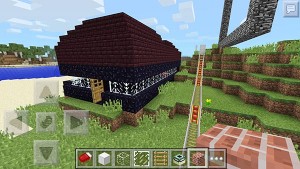 Forrest Engstrom built this house with a wraparound glass window in “Minecraft: Pocket Edition.” It is next to a railroad he and I built and a large monument he built so that he could spot his house from far away, should he become lost.

So if play is meant to prepare children for real life, why not allow children to design tools, communities and entire worlds in video games? That is exactly what they are doing in the game “Minecraft.”

To me, it seems a lot like Lego blocks but in a computer game world. As parents, we might find the room where our kids are building with Legos and say, “Whoa! You did this? Wow!”

And the same could be found if we delve into the worlds our children in “Minecraft” are playing. They might be making a simple treehouse or building an entire railroad network. It’s amazing what my 7-year-old son makes, and now I am a player, too.

The lesson really is that we, as parents, need to monitor which video games children play. It’s good to avoid painting a broad brush against all video games, just like we would for books, movies, TV shows and other media we allow in our homes. And we monitor those, too.

No, my 7-year-old son cannot play the “Grand Theft Auto” series and other violence-for-thrills games. We don’t have an Xbox or other video game console. We have an old Nintendo Wii we no longer use, but it had family-friendly games like “Mario Kart,” “Tennis,” “Sports Resort” and “Lego Star Wars: The Complete Saga.”

Forrest plays “Minecraft: Pocket Edition” on our iPad. I sometimes join in with him through my cellphone. I like survival mode; he likes creative mode.

We have told him that should he earn near-perfect grades, whether this year or in coming years, then he could have an Xbox, which would give him access to the full “Minecraft” game. And he wants that!

“Minecraft” — which, I found out, isn’t about landmines; rather, it is mining for materials with which to craft things — is an underdog story. It is a lesson that a good game isn’t about superb graphics or flashy storylines. As the makers of Lego know, children around the world love, love, love to build and create. Minecraft offers that in a survival mode and in a creative mode.

The game has sold more than 20 million copies since it came out in 2009, and is one of the best-selling independently developed games of all time, meaning it didn’t come from some big video game maker. It came from a Swedish guy named Markus Persson in 2009. He loved Lego blocks, but then became good at computer programming. The game took off under Mojang, a company he and two partners founded in 2011. Last month, Microsoft announced plans to buy Mojang for the tidy sum of $2.5 billion.

The game could be seen as a big waste of team, but children say it teaches teamwork, creativity and resourcefulness. To create items, such as a furnace, players have to gather raw materials out of the ground, and in survival mode, monsters come out every night. You can fight them or make a bed and sleep in your cave, house, shed, bunker, what have you, through the night.

But don’t take it from me. The Journal of Adolescent Research published a study that compared children who play video games to ones who did not.

Let your children play “Minecraft,” but be careful before letting them play in the entire shared “Minecraft” community. There are mean players out there. Perhaps wait until they are teenagers for that stuff.