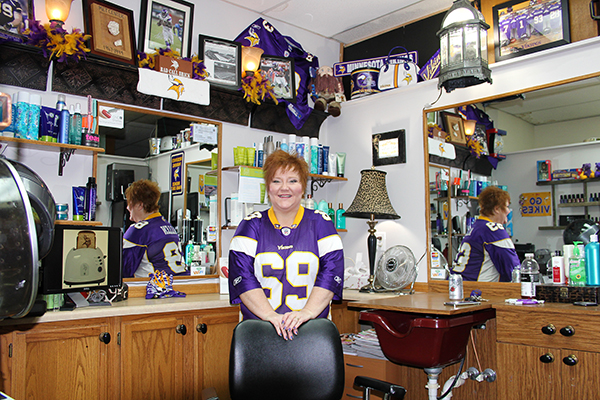 Käri Fjeldberg wears a Jared Allen jersey in her salon inside Dinah’s Style next to some Minnesota Vikings memorabilia.

Käri Fjeldberg’s salon is different than the other stations inside   Dinah’s Style. It’s covered in purple. Minnesota Vikings purple.

Fjeldberg, 50, said she’s been a fan of the Vikings her whole life. 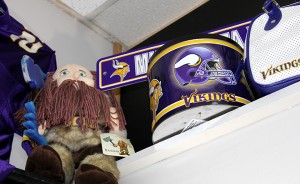 “I grew up listening to my dad (Lloyd Paulson) and my uncle Terry (Bement) scream and holler at the Purple People Eaters,” she said. “I remember sitting there as a little girl trying to figure this out. I had to be a Vikings fan. I don’t ever remember not being a fan.”

Some of that passion for the Vikings rubbed off on Fjeldberg.

“She does more hooting and hollering than I do,” said Fjeldberg’s husband, Todd, who watches games with his wife on a regular basis. “I’m a little more laid-back.”

The Purple People Eaters was the nickname for the Vikings defensive line in the 1960s and ’70s — a group that made it to the Super Bowl in three out of four years from 1973 to ’76 and included Pro Bowlers Alan Page, Carl Eller, Jim Marshall and Gary Larsen. They were the class of the NFL. 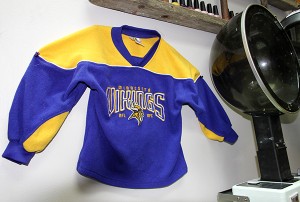 Fjeldberg’s favorite Viking of all time — John Randle, a seven-time Pro Bowler and 2010 Pro Football Hall of Fame inductee — also played on the defensive line as a tackle.

“I don’t remember being a die-hard Vikings fan until I went to my first game at the Metrodome,” she said. “I fell in love with John Randle that day as a player.”

Randle signed autographs for the grand opening of a Runnings store in Austin on May 17, and Fjeldberg met him.

“It was the thrill of my life. I was totally star-struck,” she said. “They told us there was to be no touching him. Well, I’d been waiting 25 years. I was going to pat him on the back.”

A signed photo of Randall is one of Fjeldberg’s favorite pieces of Vikings memorabilia.

However, her most cherished items have family ties. Even though some of them don’t have much intrinsic value, they surpass the rest because they bring back good memories. 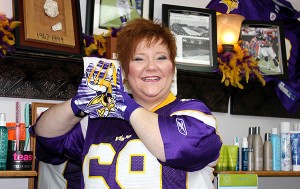 “It sounds silly, but my most prized possession of all my Vikings stuff is that,” Fjeldberg said as she pointed to a child’s sweatshirt pinned to the wall of her salon.

“Both of my boys wore it. I also have a Viking Barbie doll. It’s a prized possession, but it has nothing to do with it being a collector. It has everything to do with the fact that my mom bought it for me.”

Fjeldberg and her husband have two sons: Colby, 21, and Kendrick, 17. Kendrick is on the football and swimming teams at Albert Lea High School.

Fjeldberg grew up in Rapidan, a town that as of the 2010 census had 1,101 people and is about a 20-minute drive southwest of Mankato. Before she met her husband, Fjeldberg worked at a salon in Mankato, a town that has hosted the Vikings training camp for the last 49 years. It was 1985 when a Vikings player strolled through the door and asked for a haircut. 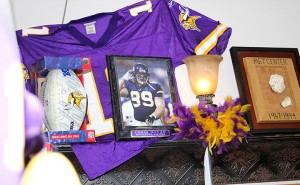 A framed photo of former Minnesota Vikings defensive tackle Chris Hovan sits on a shelf next to a few authenticated pieces of Metropolitan Stadium — where the Vikings played until 1981 — at Käri Fjeldberg’s salon inside Dinah’s Style.

“I needed two capes to go around his neck and a stool to step up on because he was so mammoth,” she said.

Wherever Fjeldberg goes, she said she likes people to know she’s a devoted Vikings fan. She even has a custom Vikings window sticker on the back of her car to prove it.

In 2012, when the state Legislature was on the verge of rejecting a stadium proposal yet again, there were fears the Vikings might move to Los Angeles. Fjeldberg hosted an autograph signing with former players at the salon she had at Northbridge Mall, Classic Reflections, and invited state legislators to hear what local fans had to say. 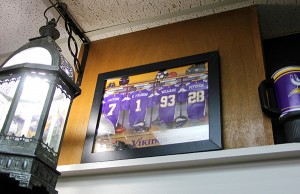 A personalized photo was given to Käri Fjeldberg as a gift with her jersey among three actual Vikings players. From left are Tarvaris Jackson, Fjeldberg, Kevin Williams and Adrian Peterson.

It’s probably not a safe bet to say Fjeldberg singlehandedly won the team a stadium, but her voice and the efforts she made were among many statewide who pushed state lawmakers to find a solution.

“To be a Vikings fan means you have to be a little ostentatious,” she said. “You’ve got to blow your horn, and that’s what I do.”

• Choose memorabilia with a personal touch

• The more unique, the better

• The smaller the things are, the more things you can display