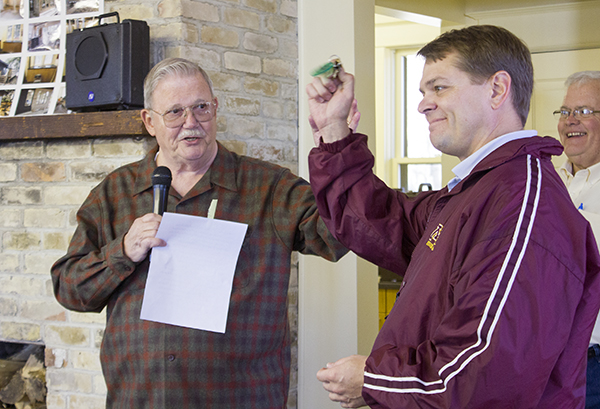 Tony Trow, left, returns the keys to the Edgewater Cottage to Albert Lea Mayor Vern Rasmussen on Saturday during a celebration at the cottage. A group of volunteers recently completed renovating the building. – Sarah Stultz/Albert Lea Tribune

Albert Lea residents got their first peek Saturday at the renovations of the Edgewater Cottage during an open house celebration. 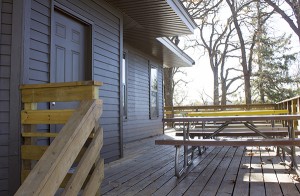 Parts of the deck were renovated on the Edgewater Cottage thanks to an effort from several local volunteers. – Sarah Stultz/Albert Lea Tribune

The restoration had been in the works for more than a year after a group of volunteers came forward to raise money to save the building.

Volunteer and organizer Tony Trow said the structure should now last another 50 years.

The building had suffered from numerous deficiencies, including a flooded basement, cracked basement floor, rotted wood, rotted siding, peeling paint and other areas with water damage.

Trow said there were 37 corporate sponsors, 23 volunteers and 103 people who donated to make the project a reality.

Albert Lea Mayor Vern Rasmussen thanked Trow and the others involved in the restoration and talked about the grass-roots effort that was undertaken to make it happen.

“I really appreciate the time and effort everybody put into this,” Rasmussen said.

According to historical records, Edgewater Cottage originated as a farmhouse.

Freeborn County Historical Museum records indicate at one point the owner of the house operated a nearby pigeon farm or squab ranch. The home later became the home for Louis Kroessin, a harness maker and poultry farmer, and then was owned by Samuel Sorenson.

In 1925 or 1926, the city of Albert Lea acquired the farm. The upper story of the house was removed and the lower part was converted into the present Edgewater Cottage. At one point, it even sold concessions, including ice cream. A deck with a view of Edgewater Bay was added after 1975.

This year is the 100th anniversary of Edgewater as a park.