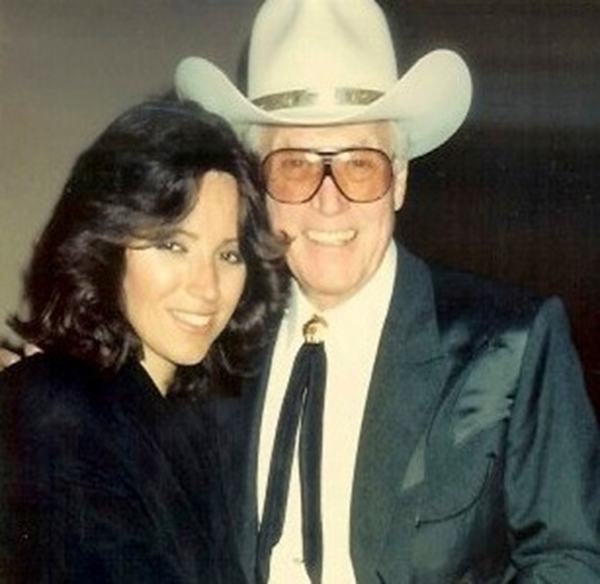 Clayton Moore stands with his daughter, Dawn, when he was inducted into the National Cowboy Hall of Fame in 1990. – Provided

As TV’s Lone Ranger in the 1950s, Clayton Moore was a hero both on and off the screen. With September being the centenary of his birth, Dawn Moore has been sharing the life and legacy of her father who passed away in 1999. 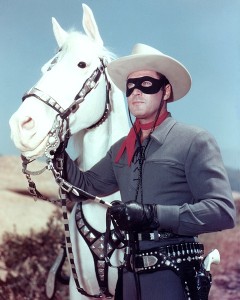 Clayton Moore stands with Silver in a publicity photo for the “Lone Ranger.” – Provided

“I still get letters from policemen, firemen, and teachers who say they chose a career in service because of him,” said Dawn from Los Angeles. “He not only acted out the Lone Ranger’s Creed on TV, but lived it.”

The Creed, written by Fran Striker in 1933 for the original Lone Ranger radio show, was an ethical guide that emphasized friendship, respect, truth, God, country and, remarkably for the period, stewardship for the planet.

Dawn will be recalling stories about her father at this year’s Lone Pine Film Festival, Calif.,Friday through Sunday.

As a child, Dawn didn’t even know her father had been the Lone Ranger until one day the pair went shopping for a television and the salesperson recognized his voice.

“I was 8 or 9, and wondered how this stranger knew my father,” she recalled. “The show ended in 1957 so I never saw it growing up.  And when we went out, no one recognized him because his character had always been masked.”

Both the mask and clothes worn by Moore were rather uncomfortable.

“They filmed the Lone Ranger at the Iverson Ranch, near Los Angeles, where summer temperatures were over 100 degrees,” explained Dawn. “Dad’s costume was made out of heavy wool and was skintight. And Jay Silverheels who played Tonto wore an outfit of heavy suede. So these guys worked their tails off making the show!”

Dawn says she had no interest working in entertainment, preferring a business career in luxury retail (see www.mooreabout.com). But she learned a lot about the show and her dad when helping him prepare his 1998 autobiography, “I Was That Masked Man.”

“I had a father who made a difference in the lives of others,” she said. “Many of his fans have told me they grew up not wanting to be the Lone Ranger, but to be Clayton Moore.”

Nick Thomas teaches at Auburn University at Montgomery, Ala., with features, columns, and interviews in over 450 magazines and newspapers.