Restaurant turns 50 this year as it sticks with same recipe 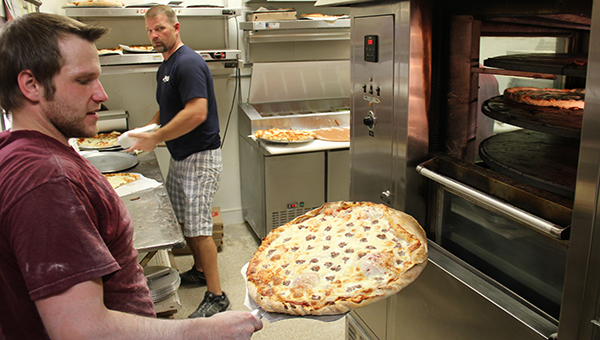 An employee takes a fresh pizza out of the oven at Jake’s Pizza during the lunch hour on Sept. 19. – Tim Engstrom/Albert Lea Tribune

Jake’s Pizza is 50 years old, and there isn’t a restaurant in Albert Lea more cherished than this one.

Jake’s Pizza comes in at No. 10 on the Tribune’s countdown of 25 favorite places of Albert Leans.

It all started in 1964 at a location on South Broadway under the ownership of Ernie and Rose Jacobson. The name Jake’s is a shortened adaptation of their family name. The pizza place moved to its location at 126 W. Clark St. in 1967. Butch Donovan bought it in 1970. Anderson’s father, Bud, became the owner in 1986.

In 2006, Bill Anderson joined up with Jim Johnson and Greg Undahl to buy Jake’s Pizza from Bud Anderson and Lynell Lorensen, Bill’s sister.

Bill Anderson said they don’t track how many people come through the door or how many pizzas they make a month. Not being a corporate pizza place is what it is all about, Anderson said. There are not new gimmicks being rolled out every year, like putting cheese in the crust.

“We don’t waste time with that,” he said. “We tell our employees, ‘Make it like you are going to eat it.’”

There are about 25 employees of Jake’s Pizza.

The interior of Jake’s Pizza has remained the same for decades, too, taking people back to their childhood visits in the 1970s and 1980s every time they enter the door. People line up for thick-crust pizza by the slice at noon and it is easy to watch pizza being made in the kitchen. Delivery offers thick or thin crust, but, if the customer doesn’t specify otherwise, the Jake’s people make a thin-crust pie cut into bite-size squares.

The radio commercials for Jake’s Pizza feature a Beach Boys-sounding chorus singing the phone number: “Call 373-7350 Jake’s Pizzaaaaaa.” It is without a doubt the most recognizable jingle in Freeborn County and likely the most memorized phone number in the county.

There are other Jake’s Pizza locations in Minnesota. They are more of a cooperative than a franchise, so each one is different. The other ones are in Wells, Mankato, Montevideo, Fairmont, St. James, Granite Falls, Willmar and Roseau. There is another chain called Jake’s Pizza in Illinois and Arizona, but they, too, are not affiliated.

No, there is only one Jake’s Pizza like the one in Albert Lea.