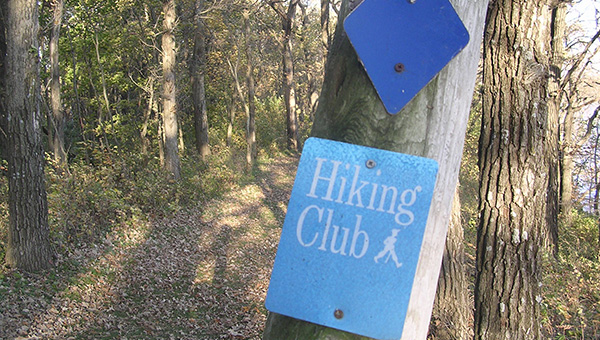 Hiking trails marked with small signs bend through the woods and grasslands of Myre-Big Island State Park east of Albert Lea. The park is a popular place to relax with nature or camp for a weekend. – Tim Engstrom/Albert Lea Tribune

It is a place to get away, yet it is so nearby.

With 2,073 acres of beautiful grasslands, oak savanna and lush lowlands, Myre-Big Island State Park, 19499 780th Ave., actually touches the Albert Lea city limits but the main part of the park is about two miles southeast of Trail’s Travel Center. It comes in at No. 4 on the Tribune’s countdown of 25 favorite places of Albert Leans.

One hundred sixteen of those acres are Big Island itself, home to a campground, camper cabin, a large picnic shelter, a nature center, trails, a parking lot, canoe rental, woods and views of Albert Lea Lake.

Prior to 1947, a large group of area citizens were trying to promote the idea of having a place called Big Island designated as state park. At that time the island was heavily wooded, owned by 17 people, and divided into what were called wood lots. There was a concern that the trees would soon be cut down for lumber and firewood. This fear ended when the state Legislature passed a bill in 1947 designating this area on Albert Lea Lake as Big Island State Park.

Two people can be credited as being promoters of this state park. One was Owen Johnson, a conservationist, amateur archeologist and lifelong area resident. The other person was Helmer Myre, a world-class wrestler, former Albert Lea police officer and Freeborn County sheriff, state representative and senator who helped with the park’s legislative action. Myre died in 1951, and in 1953 the state Legislature renamed the park for him. In 1990, it changed from Helmer Myre State Park to Myre-Big Island State Park.

Expansions to the park came in 1963 and 1974. In ’74, a realty company wanted to develop northeast of the park, but local efforts overcame many hurdles to add that land to the park. Sometime close to 1980, the state bought Camp Moraine.

Another campground at the park is the White Fox Campground, which has an RV dump site. At the White Fox and Big Island camps, there are 93 drive-in sites, 32 of which are electric. The park has four backpack sites, one group camp and a group center.

The two campgrounds tally up about 16,000 overnight visits each year. The park claims more than 113,000 annual visits. A ranger station greets visitors at the park entrance. It features a gift shop and offers brochures about the area.

The group center is Camp Moraine on New York Point. This former YMCA facility now has showers, flush toilets, a mess hall and electrical outlets. It is a popular site of a summer day camp as well as family reunions.

The Big Island Rendezvous started in 1987 on Big Island and moved to Bancroft Bay Park in the city in 1992, retaining the name of its original location.

The six-mile Blazing Star Trail starts at Frank Hall Park in Albert Lea and runs through the state park. Minnesota Department of Natural Resources plans call for an extension of the trail to Hayward, with work starting this fall. Walking and mountain biking trails criss-cross the park. Named trails are Bur Oak, Esker, Big Island and Great Marsh. In the winter, cross-country skiers enjoy the park, as there are five miles of groomed trails just for skiing. Snowmobile trails through the park connect with the trails throughout Freeborn County.

The Tribune staff compiled what it feels are the 25 favorite places of Albert Leans. The results will be published over the course of the coming week. What will be No. 1? Agree or disagree, it will be enjoyable to mull over and discuss. Send feedback to letters@albertleatribune.com.