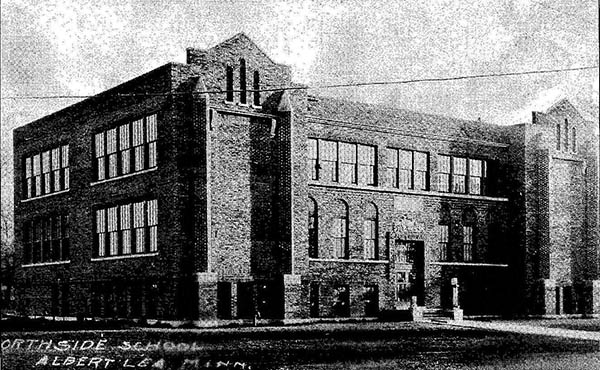 The Northside School in Albert Lea was built in 1917 to accommodate the city’s growing student population. By the early 1900s, Minnesota schools had settled into a nine-month calendar that ran from fall through spring with a three-month summer vacation. Photo from “A Pictorial History of Freeborn County, The Early Years 1850-1930,” published by the Albert Lea Tribune.

A cornerstone of the state’s culture

As the Albert Lea community debates a shift in its school calendar, looking at how the nine-month school year evolved shows the influence of two of Minnesota’s top industries — agriculture and tourism. 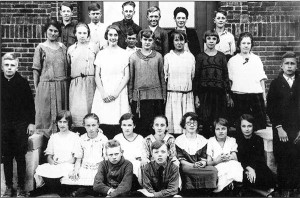 Seventh-graders at Northside School in 1923-24 take a break from their studies for a photo. Albert Lea has followed a nine-month calendar from fall to spring for many decades, building a many-layered tradition of school and summer activities.

For about a century, students have started their school year in the fall and ended in time for three months of summer vacation. Local culture revolves around this schedule, with families, sports teams, churches, youth groups and governments basing their activities on the school calendar. Trips up north, water ski shows, vacation Bible school, 4-H and the Freeborn County Fair, summer jobs for teenagers and the city pool opening with a splash are all part of summer life here. Confirmation, figure skating, Boy and Girl Scouts, dance classes and much more all kick off in the fall with school.

This tradition evolved from summer terms to the current fall-to-spring schedule, shaped by the need for rural children to help on their family farms and the desire of wealthy urban families to beat the gritty heat of cities in summer.

In the mid-1800s, Freeborn County pioneers started to organize schools, moving instruction from their homes to group settings in nearby buildings. The original terms were two months in the summer, when longer hours of sunlight allowed for chores before and after school. Warm temperatures also made it easier for students to walk to and from school, along with saving the cost of heating the school buildings.

As the county population increased, so did financial support for schools. That meant more money for teachers, buildings and supplies. That also meant more time in school for children. When the city of Albert Lea organized its first school in 1857, students started in December that year, according to the 1882 edition of the History of Freeborn County.

Two sessions, planned around the weather and farming, became common in county schools, according to Freeborn County Historical Society files. Students attended a three-month summer session around the planting season and a four-month winter session that started after harvest. In the late 1800s, schools added a fall session.

“Good attendance is absolutely essential to good school. Many parents do not appreciate this fact,” wrote Freeborn County Superintendent C.W. Levens in his 1881-82 report for the winter term. “Teachers who do, and are thoroughly in earnest about it, can make their influence felt among many parents as well as scholars. Last week I visited two schools, in which only three scholars were present. The most of absent ones were probably planting corn. Though often convenient, it is not profitable in the end, to interrupt a child’s attendance at school for a little work at home, if it can possibly be prevented.”

The superintendent also outlined the typical school day, which ran 9 a.m. to 3:45 p.m.

As early as 1883, the Minnesota Legislature set a minimum school term — four months — for schools to receive public funding.

Meanwhile, in the heavily-populated cities farther east, like Detroit and Chicago, school was held year-round, according to InfoPlease of the Family Education Network. But attendance was not mandatory and many legislatures had yet to set minimum attendance days. Schools were like the earliest daycare centers, providing safe places for children while their parents worked in factories.

In St. Paul, the school year ran 10 months, sparking a debate in the capital’s Chamber of Commerce, which eventually recommended a reduction to nine months. On Aug. 12, 1885, the Freeborn County Standard reported:

“It was contended that by the long confinement in ill-ventilated rooms the health of many children is ruined for life. One member asserted that our public school system is a cast iron one, every child being put through a course of study without reference to his individual abilities, and one of the strongest and truest points made was that pupils are harassed and made nervous by being compelled to pass frequent examinations or be graded down into lower classes. The result is a positive detriment to the health and nervous systems of the pupils. A shorter school year would mitigate these evils of the public school system, but it would not entirely obviate them.”

In 1899, Freeborn County schools were averaging 6.91 months a year, according to the local superintendent’s report in the Standard that September. By the early 1900s, schools in Minnesota and across the nation had settled into a nine-month routine, a compromise between the shorter terms in rural areas and longer terms in urban areas. This schedule allowed a break from poorly ventilated schools during sweltering summer months.

In recent times, it’s the tourism industry that influences school calendars across the state. After a successful lobby effort by the resort industry, Minnesota law mandates that public schools start after Labor Day. While the vast majority of public school students started Sept. 2 or later this year, 36 districts had state approval to start one or more schools before Labor Day for flexible learning options or for agreements with adjoining states.

Starting before Labor Day is a bad thing for Minnesota’s economy, according to the Minnesota Resort and Campground Association. On its website, the association cites a 2012 study by the University of Minnesota Center for Tourism, which found that starting school before Labor Day decreases the chances by 50 percent that families will take a trip in August or September, and 30 percent across the summer.

“It is clear that the post-Labor Day school start benefits our state, the hospitality industry, the State Fair and related fairs and the broader retail industry. Now is certainly not the time to jeopardize jobs in our state. Further, it’s clear that school boards and superintendents can schedule the necessary number of days of class time between Labor Day and early June. We strongly oppose legislation that would repeal the post-Labor Day school start law,” the association says in its legislative position.

In Albert Lea, the debate continues over the economic, educational and recreational aspects of disrupting a decades-long tradition of a nine-month school year and three-month summer vacation with a community forum scheduled for 7 p.m. Monday in the Albert Lea High School commons.