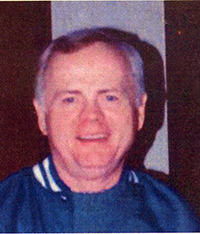 A resident of Yukon for 41 years, Ted served his country in the United States Army during the Korean conflict and was honorably discharged with the rank of corporal.

He had a long career in the banking business before his retirement in 1995.

He is survived by his wife, Verna, of 56 years; sons Brad Miland of Yukon and Doug Miland and wife, Shelly, of Grapevine, Texas; grandchildren Kendall and Kasie Miland and Jennifer Miland; great-granddaughter, Ariella Diaz; brother, Wayne Miland, of Albert Lea; sister, Janice Erdahl, of Albert Lea; as well as numerous other relatives.

Ted is preceded in death by his parents Theodore and Esther.

Memorial services were at 10 a.m. Saturday at Yanda & Son Funeral Home Chapel in Yukon with a private interment.