Warren Hubbard Thorson, 89, longtime resident of Austin, passed away peacefully Tuesday, Sept. 30, 2014, at St. John’s Lutheran Community in Albert Lea. Warren was born Jan. 2, 1925, in Austin, the son of Theodore and Ann (Hubbard) Thorson. He graduated from Austin High School in 1943 and soon after enlisted in the United States Navy. 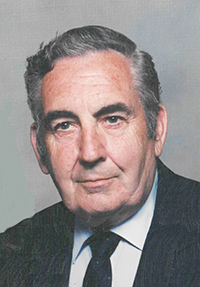 After boot camp he trained at Wahpeton School of Science in North Dakota. He spent time on several ships in different oceans and was honored to have served his country in World War II. When his military tour ended, he returned to Austin, enrolled in Austin Junior College and earned an Associate of Arts degree.

In 1947 he married Catherine Kelly in Madelia. Together they had three children, Jean, Gary and Alan. Catherine was killed in an auto accident in 1968.

In 1970, Warren was united in marriage to Verona Olson of Albert Lea. They resided on a small acreage in Austin where they enjoyed antiquing, gardening and tending their horses until moving to Albert Lea in 2007. Warren spent his entire working career as a proud employee of Austin Utilities. He thoroughly enjoyed his work at the power plant and all the great guys he worked with. Warren’s favorite pastimes were fishing, rock hunting, wood carving, dancing, listening to old time music and above all, enjoying his family. He was a charter member of Our Saviors Lutheran Church in Austin and active in many community service organizations.

He was preceded in death by his parents Theodore and Ann Thorson; first wife, Catherine; and his son, Alan.

The family greatly appreciates the love and care that his niece and nephew, Connie and Roger Kanestadt, have given to Warren over the past several years.

Funeral services will be at 11 a.m. Monday at Our Savior’s Lutheran Church in Austin with the Rev. Glenn Monson officiating. Visitation will be from 2 to 4 p.m. Sunday at Worlein Funeral Home. Interment will be in Grandview Cemetery with military honors by American Legion Post 91 and VFW Post 1216.

The family would like to express a special thank you to the wonderful staff in the memory care unit of St John’s Lutheran Community for the outstanding care and compassion he received over the past year. In lieu of flowers, memorials may be given to an organization of the donor’s choice. Worlein Funeral Home is assisting the family. Condolences may be expressed to the family online at www.worlein.com.