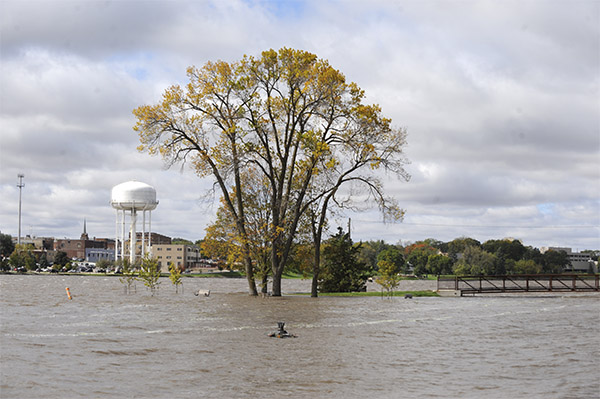 All of Fountain Lake’s Katherine Island but the bridge landing is under water in September of 2010. — Tim Engstrom/Albert Lea Tribune

Will the officials be able to keep dredge costs below $15 million estimate?

Questions abound after an engineering firm last month quoted costs more than double and almost triple the longtime estimate of $15 million for the dredging and restoration of Fountain Lake. 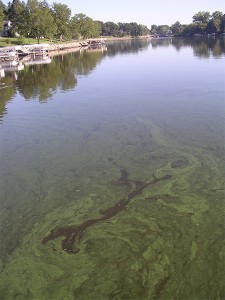 Fountain Lake most summers turns green from algae, like this photo from the summer of 2006. — Tim Engstrom/Albert Lea Tribune

Shell Rock River Watershed District Administrator Brett Behnke said residents should not be scared of the estimates presented, noting that the numbers were for discussion purposes only to help the managers consider the benefits and drawbacks for different methods for the dredging and the subsequent handling of the sediment removed from the lake.

Project Manager Andy Henschel said the dredging budget has been and remains $15 million.

“It is our goal to get the best project possible within this budget,” Henschel said.

Behnke said the estimates the engineering firm gave were based on many unknowns and numbers from contractors in more metropolitan areas. There are also other options being considered.

“I’m confident that with all the options out there and the research that we’re doing that the $15 million that we have budgeted for this project will indeed make a better, cleaner lake,” Behnke said.

Behnke said he thinks the estimates were high after seeing the costs of the Clear Lake and Crystal Lake dredging.

He said the engineering firm estimated the dredging at $9 per cubic yard, when it was only $3 or $3.50 per cubic yard in the Clear Lake and Crystal Lake projects.

The cost comparisons came as the watershed board considers how to handle the sediment to be removed from the lake.

Behnke said the district is considering hydraulic or mechanical dredging, or combinations of multiple methods. 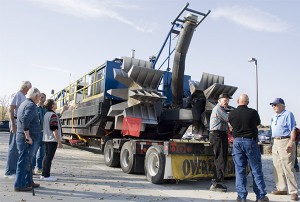 Gary Pestorious, chairman of the Shell Rock River Watershed District’s board of managers, said no matter which method is used, the dredging will not exceed $15 million.

The Legislature earlier this year approved $7.5 million in state funding for the project, which will be matched by $7.5 million in funds raised from the local-option sales tax.

Pestorious said, noting what he has studied, he still thinks the district will still be able to dredge what it had hoped and stay within the budget.

Another question raised is whether the district will be able to use the 2010 IMS 7012 HP 51-foot Versi hydraulic dredge it purchased in 2012 for $340,000, along with the pipes, pumping and other equipment necessary to pump the dredge material away from the lake for $435,000. It is stored in a shed owned by Pestorious’ son in Freeborn County.

Pestorious said if the district wanted to dredge 1.5 million cubic yards of sediment solely with the machinery already purchased it would take five to seven years. 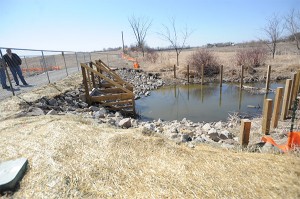 Installing electric fish barriers is one of several projects the Shell Rock River Watershed District has done upstream to help the quality of water coming into Fountain Lake. The Mud Lake fish barrier was the first. — Brie Cohen/Albert Lea Tribune

Another option would be to have a well-known dredging company come in with a larger dredge and work together with the district’s dredge and get the project done in one to two years. The district’s dredge could be used for the lake’s bays and to get close to the shoreline, and this option would cut down on the costs of running a dredge for several additional years, he said.

He noted that dredging is down across the country, which makes for a good market for the district. The district’s dredge will also likely be used for an Army Corps of Engineers dredging project on the west side of Albert Lea Lake.

“This dredge will work with both situations, and when we’re done with it, we’ll sell it,” he said.

Pestorious said he doesn’t regret the board’s decision to purchase the dredge because he thinks it showed the state and other agencies that the district is serious about dredging.

He said he believes in the district and its staff and said he and the other board members are trying to make the right decisions. The board is looking to hire a dredging consultant who will monitor the project, give advice for hiring a dredging company and make sure the work is done properly.

Once the board determines which method to follow to handle the dredged material, district officials will begin talking with landowners to find a place where that material will be taken.

Behnke said once the dredging design is completed, there will be public hearings and meetings with stakeholders to get feedback. In the meantime, district leaders are working closely with the Department of Natural Resources, the Minnesota Pollution Control Agency and other agencies.

He hopes the dredging can begin in the spring of 2016.