The Metropolitan Opera: Live in HD presents “Carmen” by Georges Bizet this weekend. 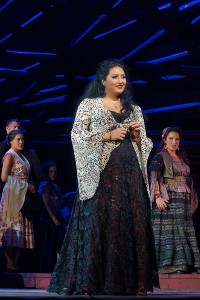 Richard Eyre’s production of “Carmen” stars Georgian mezzo-soprano Anita Rachvelishvili in the title role of Carmen, a part she has sung to acclaim at many of the world’s leading opera houses. Aleksandrs Antonenko sings the obsessed soldier Don Jose, soprano Anita Hartig makes her highly-anticipated HD debut as Micaela and Ildar Abdrazakov is the toreador Escamillo in this performance, led by Spanish conductor Pablo Heras-Casado.

Previously presented in HD in 2010, “Carmen” remains the Met’s best-selling transmission to date.

“Carmen” features some of the most recognizable music in the opera repertoire. Excerpts have been used in movies ranging from the Marx Brother’s 1929 “The Cocoanuts” and the 1976 baseball classic “The Bad News Bears” to the 2009 Disney/Pixar film “Up.”

“Meet the Met,” an opera talk, will be on Friday in the lobby of the Marion Ross Performing Arts Center beginning at 12:15 p.m.

The synopsis, singers and opera background are some the items of discussion. A shortened version is held prior to the opera at 11:30 a.m. Saturday in the Green Room of the theater.

Tickets are $20 for adults and $12 for students. A number of free student tickets are still available. Students must show their ID. Also available is a five opera flex ticket for $90, a 10% discount.

Regular tickets are available online at www.actonbroadway.com or at the box office.

• Children can go trick-or-treating from 3 to 5 p.m. at Good Samaritan Society, 75507 240th St. Residents will have “porch lights” on and will have plenty of treats to pass out.

• The Haunted Walk sponsored by United Way and Albert Lea Parks and Recreation, will be from 7 to 9 p.m. at the Brookside boat landing. Cost is $5. Not recommended for children under 10 years old.

• “Frankenstein” by National Theatre Live will be shown at 7 p.m. at the Marion Ross Performing Arts Center, 147 N. Broadway. Tickets are $20 for adults and $12 for students.

• A benefit for Steve Sundve will be from noon to 7 p.m. at the Albert Lea Moose Lodge at Skyline Plaza. There will be a taco dinner, bake sale and silent auction.

• The Eagles Auxiliary Fundraiser will be from 4:30 to 6:30 p.m. at the Eagles Club, 205 W. William St. A 10-ounce prime rib or walleye pike fillet will be served along with baked potato, green beans, tossed salad, bread and coffee. Cost is $15.

• Discin’ in the Dark will begin at 6 p.m. at the Oak Island Disc Golf Course. Disc golfers will bring lights to tape to their discs and play the course safari-style, which means not in the designated order. For instance, the first hole will be from the tee pad of Hole 8 to a temporary basket on the tee pad of Hole 2.

• “Frankenstein” by National Theatre Live will be shown at 7 p.m. at the Marion Ross Performing Arts Center, 147 N. Broadway. Tickets are $20 for adults and $12 for students.

• The Last Revel, a folk-bluegrass-American band, will play at 7:30 p.m. at the Lighthouse Theater & Event Center, 621 Marshall St. Tickets are $15 in advance or $20 at the door. Tickets available at Marshall Street Music, Hy-Vee, Stadheim Jewelers and the Albert Lea Convention & Visitor’s Bureau.

• The Glenville-Emmons Wolverines trap team will have a fundraiser pancake breakfast from 8 a.m. to 12:30 p.m. at the Albert Lea American Legion Club. Pancakes, scrambled eggs, potatoes and sausage links will be served. Cost is $7 for ages 7 and older, free for children ages 6 and under.

• The Alden American Legion, 142 N. Broadway, will serve breakfast from 8 a.m. to noon. Pancakes, scrambled eggs, sausage links, milk, juice and coffee will be served. Cost is $5, free for children under age 6.

• The Bolshoi Ballet from Moscow: Live in HD will perform “Legends of Love” at 5 p.m. at the Marion Ross Performing Arts Center, 147 N. Broadway. Tickets are $20 for adults and $12 for students.