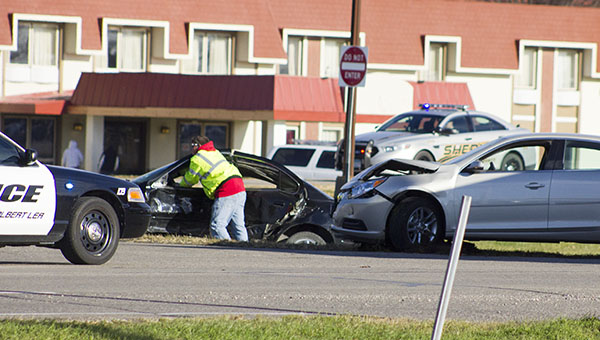 A tow truck pulls a black 2004 Pontiac Grand Am out of the median on East Main Street after a two-car crash in the road’s intersection with Prospect Avenue. — Sarah Stultz/Albert Lea Tribune

Driver fails to yield to stop sign at intersection

Their injuries were not life-threatening, according to police.

Reports stated Larson was driving northbound on Prospect Avenue in a 2004 Pontiac Grand Am when she failed to yield to the stop sign at the road’s intersection with Main Street and pulled out into the path of a 2014 Chevy Malibu, driven by Trygstad, that was headed eastbound.

The Malibu struck the driver’s side of the Grand Am, and the Grand Am was pushed into the median.

Albert Lea firefighters extricated Larson from her vehicle using the Jaws of Life.