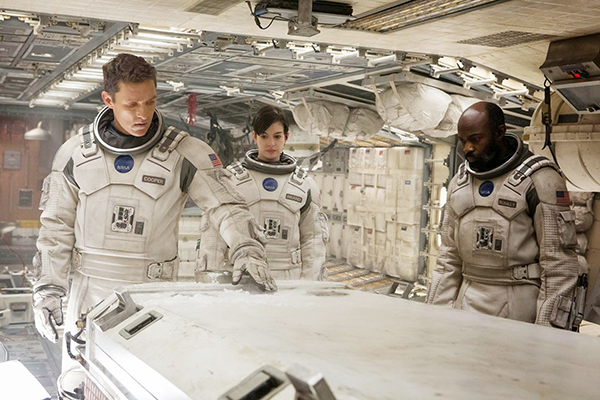 An Albert Lea native had a hand in the creation of the costumes on the latest Christopher Nolan movie, “Interstellar.”

Stacia Lang, daughter of Neil and Barb Lang, worked as a key specialty costumer on the film, now showing at Cinema 7 at Northbridge Mall in Albert Lea.

What that job title means is she worked to execute the vision of the costume designer, Mary Zophres, and Nolan, the director.

“Everybody has their role,” Lang said. 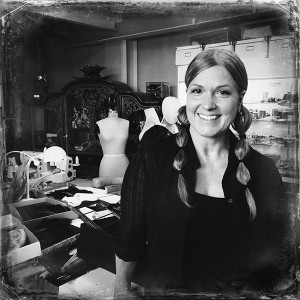 Stacia Lang, shown here in black and white, has worked on an array of Hollywood blockbusters and for Minnesota music star Prince. – Steve Parke Photography

The 1982 graduate of Albert Lea High School said “Interstellar” was challenging because the astronaut suits were set at a nonspecific future date — something like 80 years — but the characters had lived their lives in outer space, so the suits had to look like they were 40 years old.

“Christopher Nolan was ever-present, unlike some directors,” Lang said. “How the astronauts looked was critical to the story for him.”

“Interstellar” stars Matthew McConaughey, Anne Hathaway and Jessica Chastain. The film is about astronauts on the ship Endurance who discover a wormhole near Saturn and are able to surpass expectations of human travel. Meanwhile, Earth is no longer sustainable, and the wormhole is a means to save the human race by searching for habitable planets in other star systems.

Nolan is known for twisting, nonlinear plots such as “Inception.” He also directed “Man of Steel” and the three latest Batman movies.

In the fall of 1982, Lang went to New York to attend the Fashion Institute of Technology and learned design, sewing and illustrations skills, among other abilities. She went to school for fashion but quickly switched to costumes and, she said, soon realized she really enjoyed specialty costumes — not the everyday garb a character wears but the outlandish or unusual outfits.

She spent years making specialty costumes on Broadway before moving to Minneapolis in 1990 to make patterns for Prince and eventually designing costumes for the music star. She moved to Los Angeles in the fall of 1997. She had decided she didn’t want to design so much as make things.

A costume designer designs the costumes. The key costumer makes the vision happen by determining materials and delegating the work of the costumes.

Lang has been a costumer or a key costumer for a long list of movies needing specialty work, such as science fiction and superhero tales. She has worked on the two “The Amazing Spider-Man” movies, “Man of Steel,” “Star Trek Into Darkness,” “Tron: Legacy,” “Hellboy II: The Golden Army,” “Fantastic 4: Rise of the Silver Surfer,” “Blades of Glory,” “Eragon,” “Superman Returns,” “The Chronicles of Riddick,” “X-Men 2” and several others.

Lang said her work often requires being detail-oriented. She had a role in figuring out how aspects of the astronaut suits would come together, such as the way the backpack attaches to the suit or the gasket for attaching the helmet. She said molded parts of the suit, such as the helmet and the chestplate, are subcontracted.

Most of all, she has to make sure the whole thing actually is wearable.

“We need to make it work on a human body because ultimately, it is our responsibility to make sure it fits,” Lang said.

OK, so did Lang see McConaughey and Hathaway? She saw them in screen tests but on-set costumers handled the outfits she made during shooting. Lang showed them how the suits worked and moved on to her next project, “Jupiter Ascending,” slated for release in February.

However, Lang has worked with stars before. She sometimes builds costumes for extras, sometimes for an array of cast members and sometimes just a single character. That’s what she did for Jeff Bridges in “Tron: Legacy.”

“It helps for me to have that knowledge of fabrics and techniques,” she said.

And she doesn’t always do futuristic or superhero movies. She was a key specialty costumer for “Burlesque,” which she described as “a real treat.” Lang said she would enjoy someday working on a period piece.

Meanwhile, she resides in downtown Los Angeles in an artist loft at an apartment complex called The Brewery Art Colony, because it had once been a Pabst brewery. She returns to Albert Lea from time to time, and if you see her, she can tell you about it.