Ardus I. Wangen, 100, of Austin died Monday, Nov. 24, 2014, at Mayo Clinic Health System in Rochester, St. Marys campus. Ardus Idella Lerum was born July 12, 1914, in Freeborn County to Ole and Thora Lerum. She graduated from Albert Lea High School in 1933 and later attended the University of Winona, where she received a bachelor’s degree in education. 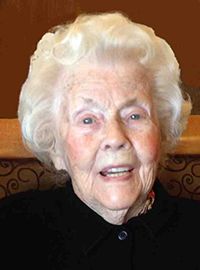 On Sept. 24, 1938, Ardus and Arthur Wangen were united in marriage at Oakland Lutheran Church in Oakland. Arthur passed away in 1981. Ardus enjoyed 42 years as a teacher in rural Freeborn and Mower counties, serving grades one through eight in one- and two-room schools. She finished her career in the Hayfield school district.

The Wangens farmed near Hayward and then in the Rose Creek area before purchasing the Mission Garden/Westward Inn Motel in Austin. Ardus enjoyed traveling and church activities. She was a member of Grace Baptist Church, the Sons of Norway, Travel Club, Retired Teachers, the Christian Women’s Club and served as travel coordinator for the Hormel Home. Ardus will be greatly missed by her family and friends.

She was preceded in death by her parents Ole and Thora Lerum; her husband, Arthur Wangen; three brothers; an infant daughter; and son-in-law, Eugene Bjork.

Funeral services will be at 1 p.m. Friday at Grace Baptist Church in Austin with the Rev. Brett Williams officiating. Visitation will be from 11 a.m. to 1 p.m. immediately preceding the service. Interment will be in Oakland Lutheran Cemetery. Memorials are preferred to Grace Baptist Church, Austin American Legion, Austin VFW or recipient of donor’s choice. Services are prearranged and performed by Worlein Funeral Home of Austin.  Condolences may be expressed to the family online at www.worlein.com.